High-Temperature and Drought Stress Effects on Growth, Yield and Nutritional Quality with Transpiration Response to Vapor Pressure Deficit in Lentil 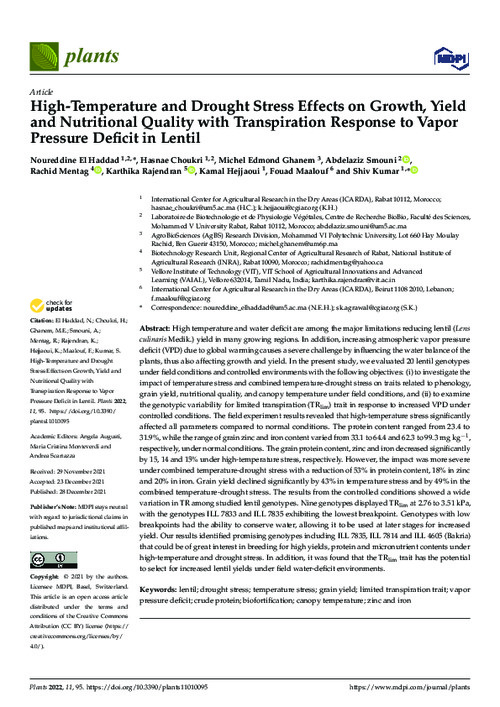 High temperature and water deficit are among the major limitations reducing lentil (Lens culinaris Medik.) yield in many growing regions. In addition, increasing atmospheric vapor pressure deficit (VPD) due to global warming causes a severe challenge by influencing the water balance of the plants, thus also affecting growth and yield. In the present study, we evaluated 20 lentil genotypes under field conditions and controlled environments with the following objectives: (i) to investigate the impact of temperature stress and combined temperature-drought stress on traits related to phenology, grain yield, nutritional quality, and canopy temperature under field conditions, and (ii) to examine the genotypic variability for limited transpiration (TRlim) trait in response to increased VPD under controlled conditions. The field experiment results revealed that high-temperature stress significantly affected all parameters compared to normal conditions. The protein content ranged from 23.4 to 31.9%, while the range of grain zinc and iron content varied from 33.1 to 64.4 and 62.3 to 99.3 mg kg−1 , respectively, under normal conditions. The grain protein content, zinc and iron decreased significantly by 15, 14 and 15% under high-temperature stress, respectively. However, the impact was more severe under combined temperature-drought stress with a reduction of 53% in protein content, 18% in zinc and 20% in iron. Grain yield declined significantly by 43% in temperature stress and by 49% in the combined temperature-drought stress. The results from the controlled conditions showed a wide variation in TR among studied lentil genotypes. Nine genotypes displayed TRlim at 2.76 to 3.51 kPa, with the genotypes ILL 7833 and ILL 7835 exhibiting the lowest breakpoint. Genotypes with low breakpoints had the ability to conserve water, allowing it to be used at later stages for increased yield. Our results identified promising genotypes including ILL 7835, ILL 7814 and ILL 4605 (Bakria) that could be of great interest in breeding for high yields, protein and micronutrient contents under high-temperature and drought stress. In addition, it was found that the TRlim trait has the potential to select for increased lentil yields under field water-deficit environments