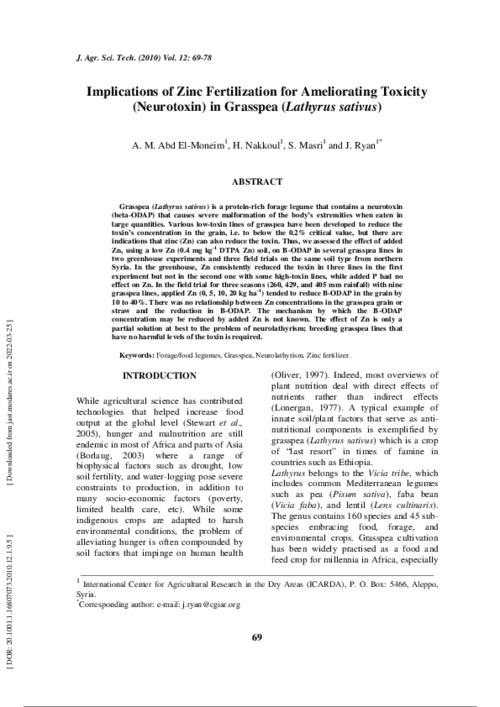 Grasspea (Lathyrus sativus) is a protein-rich forage legume that contains a neurotoxin (beta-ODAP) that causes severe malformation of the body's extremities when eaten in large quantities. Various low-toxin lines of grasspea have been developed to reduce the toxin's concentration in the grain, i.e. to below the 0.2% critical value, but there are indications that zinc (Zn) can also reduce the toxin. Thus, we assessed the effect of added Zn, using a low Zn (0.4 mg kg(-1) DTPA Zn) soil, on B-ODAP in several grasspea lines in two greenhouse experiments and three field trials on the same soil type from northern Syria. In the greenhouse, Zn consistently reduced the toxin in three lines in the first experiment but not in the second one with some high-toxin lines, while added P had no effect on Zn. In the field trial for three seasons (260, 429, and 405 mm rainfall) with nine grasspea lines, applied Zn (0, 5, 10, 20 kg ha(-1)) tended to reduce B-ODAP in the grain by 10 to 40%. There was no relationship between Zn concentrations in the grasspea grain or straw and the reduction in B-ODAP. The mechanism by which the B-ODAP concentration may be reduced by added Zn is not known. The effect of Zn is only a partial solution at best to the problem of neurolathyrism; breeding grasspea lines that have no harmful levels of the toxin is required.