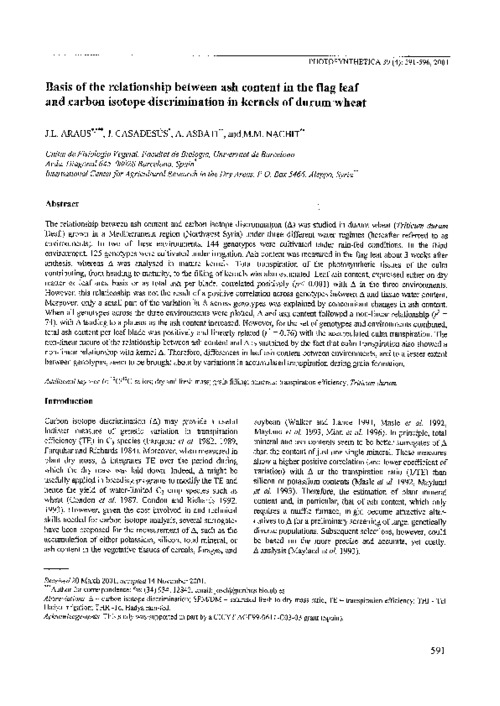 The relationship between ash content and carbon isotope discrimination (Δ) was studied in durum wheat (Triticum durum Desf.) grown in a Mediterranean region (Northwest Syria) under three different water regimes (hereafter referred to as environments). In two of these environments, 144 genotypes were cultivated under rain-fed conditions. In the third environment, 125 genotypes were cultivated under irrigation. Ash content was measured in the flag leaf about 3 weeks after anthesis, whereas Δ was analysed in mature kernels. Total transpiration of the photosynthetic tissues of the culm contributing, from heading to maturity, to the filling of kernels was also estimated. Leaf ash content, expressed either on dry matter or leaf area basis or as total ash per blade, correlated positively (p< 0.001) with Δ in the three environments. However, this relationship was not the result of a positive correlation across genotypes between Δ and tissue water content. Moreover, only a small part of the variation in Δ across genotypes was explained by concomitant changes in ash content. When all genotypes across the three environments were plotted, Δ and ash content followed a non-linear relationship (r 2 = 74), with Δ tending to a plateau as the ash content increased. However, for the set of genotypes and environments combined, total ash content per leaf blade was positively and linearly related (r 2 = 0.76) with the accumulated culm transpiration. The non-linear nature of the relationship between ash content and Δ is sustained by the fact that culm transpiration also showed a non-linear relationship with kernel Δ. Therefore, differences in leaf ash content between environments, and to a lesser extent between genotypes, seem to be brought about by variations in accumulated transpiration during grain formation.