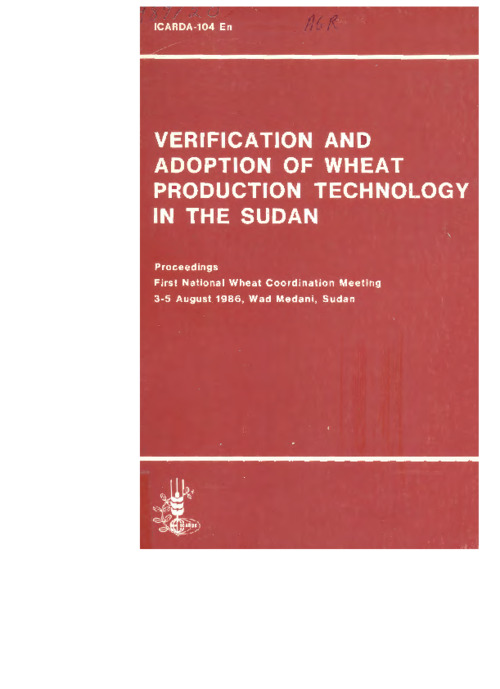 The first National Wheat Coordination Meeting held in Sudan was funded by the ICARDAIOPEC Whear Pilot Project for the Verification and Adoption of Improved Wheat Production Technology in Farmers' Fields in Sudan. The meeting was held in Wad Medani. 3 to 5 August 1986. It was organized to review the work done during the 1985/1986 season and to develop a Work Plan for the l986/1987 season. The meeting was well arranged by policymakers, farmers, administrators, and scientists from throughout Sudan. The OPEC fund provided financial support (US$ 142,000) to strengthen ARC capabilities to verify research results under actual farming conditions through a system of on-farm trials in the major wheat-producing areas (Gezira, New Halfa, and the Northern Region) with the participation of farmers, extension workers, and production staff Socio-economic surveys have also been carried out to specify the factors contributing to yield variability among farmers and the considerable yield gap which exists between researchers and farmers' yields. The project also includes backup research at research stations in crop improvement, land preparation, water management, and crop protection. In recent years, as the demand for world food supplies has risen, interest in wheat production in Sudan has increased. This interest has been heightened by the development of new wheat varieties and by the help and encouragement of the International Center for Agricultural Research in the Dry Areas (ICARDA). These new wheat varieties potentially have very high yields but require specific growing techniques. Accordingly, there has been a renewed interest in improved wheat agronomy, mechanized cultivation, irrigation, and, above all, the prevention of crop losses from pest arrack. This report attempts to assemble all aspects of agricultural practices and limitations and inform the reader as to how best wheat production in Sudan can be tackled. It is hoped that this will stimulate the continuation of the much-needed work on this important crop to enable Sudan to produce enough food to feed itself and the the hungry world around it.