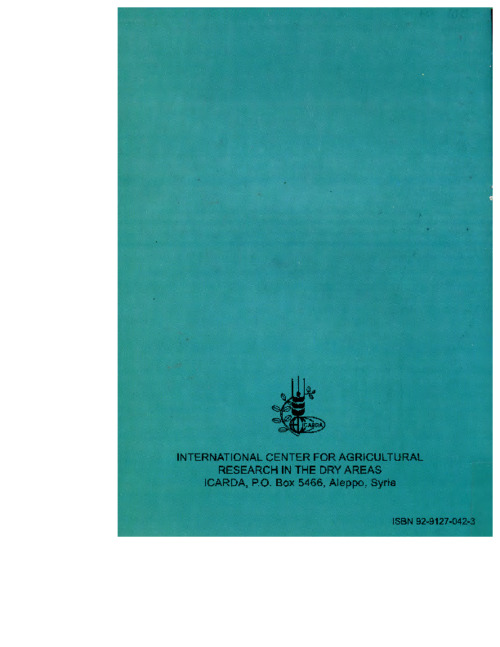 Faba bean, lentil, and chickpea are among the most important food legume crops in Sudan, providing a major part of the daily diet for the population. Because of their high protein content, they also provide a major portion of the protein requirement to alleviate malnutrition problems in the country. Food legume crops also play an important role in sustaining the productivity of the farming systems in Sudan because of their beneficial effect on the soil through the fixation of atmospheric nitrogen Yield levels of food legumes have been considerably low. Because of low production and increasing domestic demand, imports and prices of food legumes have increased to the point of becoming unaffordable to the large low-income sector of the population. Thus, striving to achieve self-sufficiency in food legumes has been vital to meeting local demand and reducing imports. In its efforts to overcome the constraints hindering agricultural development, particularly in the production of food legumes and wheat, Sudan, through its Agricultural Research Corporation (ARC), has joined forces with the International Center for Agricultural Research in the Dry Areas (ICARDA) in a collaborative program involving two other Nile Valley countries: Egypt and Ethiopia. The Nile Valley Regional Program (NVRP) for Cool-Season Food Legumes started in Sudan in 1988189 and extended to 1994195 through the support of the Directorate for International Cooperation (DGIS), Ministry of Foreign Affairs, the Netherlands. Nearly a decade before, in 1979, the first ICARDA regional outreach project-the Nile Valley Project (NVP)-had started, initially to improve faba bean in Egypt and Sudan, and later, in Ethiopia as well. The project was financed by the International Fund for Agricultural Development (TFAD) and extended through two phases from 1979 to 1985. In the third phase, Italy joined with IFAD to support NVP activities from 1985186 to 1987/88. The approach followed in the NVP and, later, in the NVRP is considered an effective methodology for technology transfer and capacity building. The Food Legumes Program has the overall objective of developing improved technologies and transferring them to the farmers to enhance productivity and yield stability of food legumes, with due consideration to the sustainability of the farming systems under which these crops are produced