Wheat Production and Breeding in Ethiopia: Retrospect and Prospects 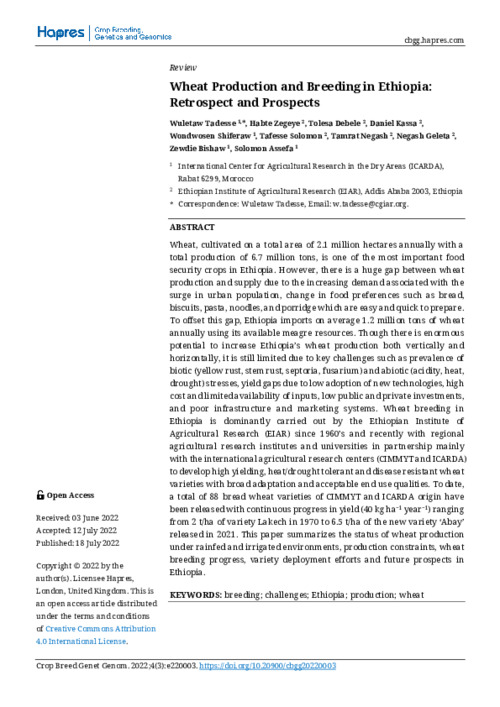 Wheat, cultivated on a total area of 2.1 million hectares annually with a total production of 6.7 million tons, is one of the most important food security crops in Ethiopia. However, there is a huge gap between wheat production and supply due to the increasing demand associated with the surge in urban population, change in food preferences such as bread, biscuits, pasta, noodles, and porridge which are easy and quick to prepare. To offset this gap, Ethiopia imports on average 1.2 million tons of wheat annually using its available meagre resources. Though there is enormous potential to increase Ethiopia’s wheat production both vertically and horizontally, it is still limited due to key challenges such as prevalence of biotic (yellow rust, stem rust, septoria, fusarium) and abiotic (acidity, heat, drought) stresses, yield gaps due to low adoption of new technologies, high cost and limited availability of inputs, low public and private investments, and poor infrastructure and marketing systems. Wheat breeding in Ethiopia is dominantly carried out by the Ethiopian Institute of Agricultural Research (EIAR) since 1960’s and recently with regional agricultural research institutes and universities in partnership mainly with the international agricultural research centers (CIMMYT and ICARDA) to develop high yielding, heat/drought tolerant and disease resistant wheat varieties with broad adaptation and acceptable end use qualities. To date, a total of 88 bread wheat varieties of CIMMYT and ICARDA origin have been released with continuous progress in yield (40 kg ha−1 year−1) ranging from 2 t/ha of variety Lakech in 1970 to 6.5 t/ha of the new variety ‘Abay’ released in 2021. This paper summarizes the status of wheat production under rainfed and irrigated environments, production constraints, wheat breeding progress, variety deployment efforts and future prospects in Ethiopia.