Identification and Toxigenicity of Aspergillus spp. from Soils Planted to Peanuts in Eastern Zambia 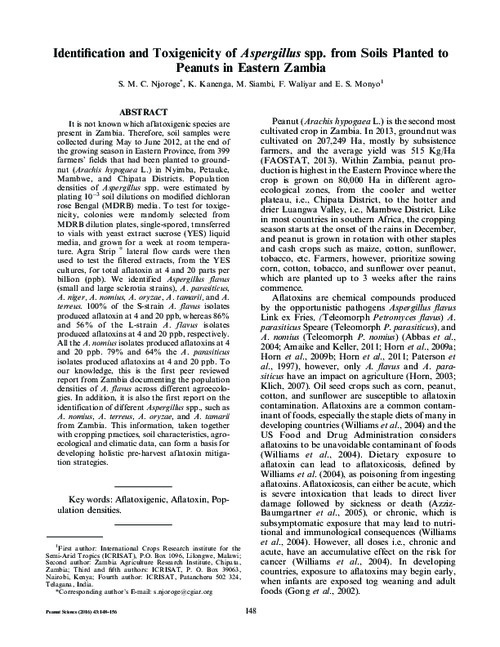 It is not known which aflatoxigenic species are present in Zambia. Therefore, soil samples were collected during May to June 2012, at the end of the growing season in Eastern Province, from 399 farmers’ fields that had been planted to groundnut (Arachis hypogaea L.) in Nyimba, Petauke, Mambwe, and Chipata Districts. Population densities of Aspergillus spp. were estimated by plating 10 3 soil dilutions on modified dichloran rose Bengal (MDRB) media. To test for toxigenicity, colonies were randomly selected from MDRB dilution plates, single-spored, transferred to vials with yeast extract sucrose (YES) liquid media, and grown for a week at room temperature. Agra Strip t lateral flow cards were then used to test the filtered extracts, from the YES cultures, for total aflatoxin at 4 and 20 parts per billion (ppb). We identified Aspergillus flavus (small and large sclerotia strains), A. parasiticus, A. niger, A. nomius, A. oryzae, A. tamarii, and A. terreus. 100% of the S-strain A. flavus isolates produced aflatoxin at 4 and 20 ppb, whereas 86% and 56% of the L-strain A. flavus isolates produced aflatoxins at 4 and 20 ppb, respectively. All the A. nomius isolates produced aflatoxins at 4 and 20 ppb. 79% and 64% the A. parasiticus isolates produced aflatoxins at 4 and 20 ppb. To our knowledge, this is the first peer reviewed report from Zambia documenting the population densities of A. flavus across different agroecologies. In addition, it is also the first report on the identification of different Aspergillus spp., such as A. nomius, A. terreus, A. oryzae, and A. tamarii from Zambia. This information, taken together with cropping practices, soil characteristics, agroecological and climatic data, can form a basis for developing holistic pre-harvest aflatoxin mitigation strategies.