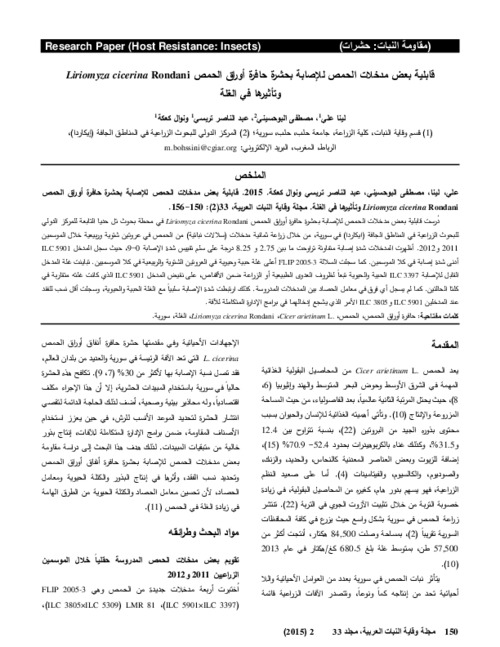 The susceptibility of some chickpea accessions to infestation with leaf miner Liriomyza cicerina Rondani was studied at the International Centre for Agricultural Research in the Dry Areas (ICARDA), Aleppo, Syria. Eight accessions were winter- and spring-sown during the 2011 and 2012 seasons. Infestation severity ranged between 2.7 and 8.25 based on a 0-9 scale. The lowest severity, during the 2011 and 2012 seasons, was observed on the accession ILC5901. The selection FLIP2005-3 produced the highest seed and biomass yields in both winter- and spring-sown chickpea in both seasons. The seed and biomass yields of the accession ILC 3397 varied depending on type of planting, in the field or under cage, while the accession LC5901 produced approximately equal yields in both planting types. The results also showed no significant differences in harvest index between accessions, while infestation severity was negatively correlated with seed and biomass yields. The lowest yield loss was recorded for the accessions ILC5901 and ILC3805. The use of resistant cultivars in IPM programs for leaf miner management should be encouraged.