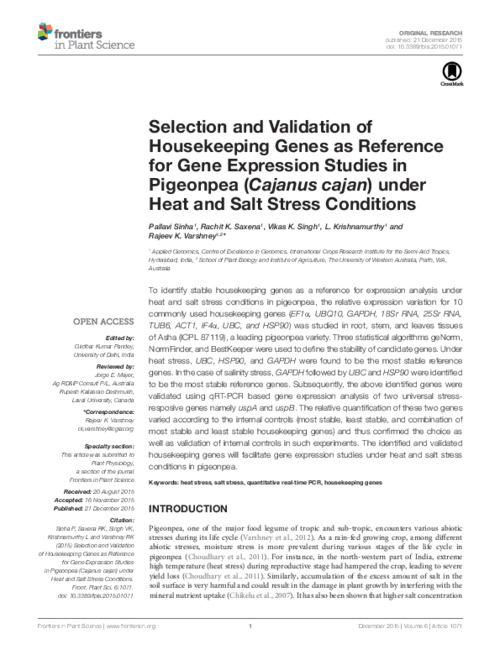 To identify stable housekeeping genes as a reference for expression analysis under heat and salt stress conditions in pigeonpea, the relative expression variation for 10 commonly used housekeeping genes (EF1α, UBQ10, GAPDH, 18Sr RNA, 25Sr RNA, TUB6, ACT1, IF4α, UBC, and HSP90) was studied in root, stem, and leaves tissues of Asha (ICPL 87119), a leading pigeonpea variety. Three statistical algorithms geNorm, NormFinder, and BestKeeper were used to define the stability of candidate genes. Under heat stress, UBC, HSP90, and GAPDH were found to be the most stable reference genes. In the case of salinity stress, GAPDH followed by UBC and HSP90 were identified to be the most stable reference genes. Subsequently, the above identified genes were validated using qRT-PCR based gene expression analysis of two universal stress-resposive genes namely uspA and uspB. The relative quantification of these two genes varied according to the internal controls (most stable, least stable, and combination of most stable and least stable housekeeping genes) and thus confirmed the choice as well as validation of internal controls in such experiments. The identified and validated housekeeping genes will facilitate gene expression studies under heat and salt stress conditions in pigeonpea.