Translational Genomics in Agriculture: Some Examples in Grain Legumes 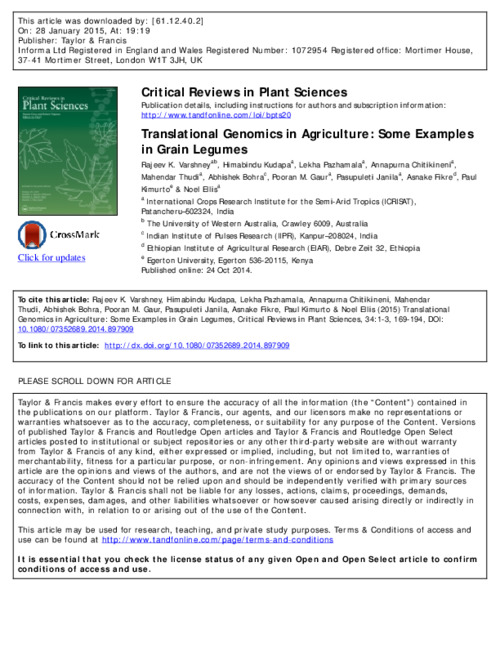 Recent advances in genomics and associated disciplines like bioinformatics havemade it possible to develop genomic resources, such as large-scale sequence data for any crop species.While these datasets have been proven very useful for the understanding of genome architecture and dynamics as well as facilitating the discovery of genes, an obligation for, and challenge to the scientific community is to translate genome information to develop products, i.e. superior lines for trait(s) of interest.We call this approach,“translational genomics in agriculture” (TGA). TGA is currently in practice for cereal crops, such as maize (Zea mays) and rice (Oryza sativa), mainly in developed countries and by the private sector; progress has been slow for legume crops. Grown globally on 62.8 million ha with a production of 53.2 million tons and a value of nearly 24.2 billion dollars, the majority of these legumes have low crop productivity (<1 ton/ hectare) and are in the developing countries of sub Saharan Africa, Asia and South America. Interestingly, the last five years have seen enormous progress in genomics for these legume crops. Therefore, it is time to implement TGA in legume crops in order to enhance crop productivity. and to ensure food security in developing countries. Prospects, as well as some success stories of TGA, in addition to advances in genomics, trait mapping and gene expression analysis are discussed for five leading legume crops, chickpea (Cicer arietinum), common bean (Phaseolus vulgaris), groundnut (Arachis hypogaea), pigeonpea (Cajanus cajan) and soybean (Glycine max). Some efforts have also been outlined to initiate/ accelerate TGA in three additional legume crops namely faba bean (Vicia faba), lentil (Lens culinaris) and pea (Pisum sativum).