Assessing the risk of flooding in Central Tunisia 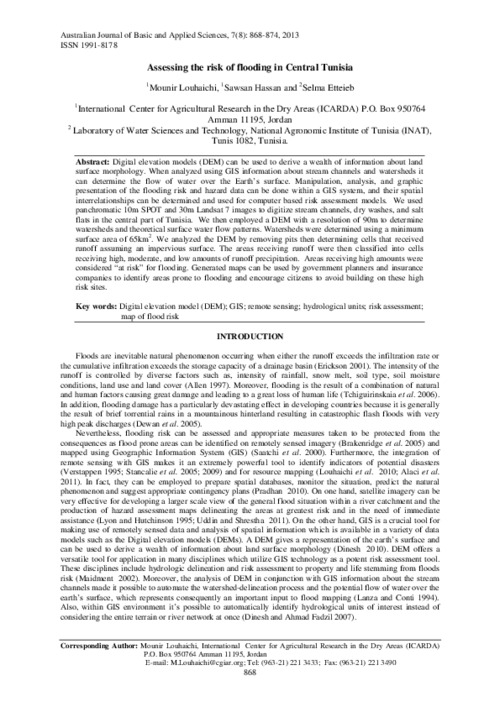 Digital elevation models (DEM) can be used to derive a wealth of information about land surface morphology. When analyzed using GIS information about stream channels and watersheds it can determine the flow of water over the Earth’s surface. Manipulation, analysis, and graphic presentation of the flooding risk and hazard data can be done within a GIS system, and their spatial interrelationships can be determined and used for computer based risk assessment models. We used panchromatic 10m SPOT and 30m Landsat 7 images to digitize stream channels, dry washes, and salt flats in the central part of Tunisia. We then employed a DEM with a resolution of 90m to determine watersheds and theoretical surface water flow patterns. Watersheds were determined using a minimum surface area of 65km2. We analyzed the DEM by removing pits then determining cells that received runoff assuming an impervious surface. The areas receiving runoff were then classified into cells receiving high, moderate, and low amounts of runoff precipitation. Areas receiving high amounts were considered “at risk” for flooding. Generated maps can be used by government planners and insurance companies to identify areas prone to flooding and encourage citizens to avoid building on these high risk sites.