Assessing the Impacts of the GAFTA Agreement on Selected Members’ bilateral Agricultural Trade: an Application of the Gravity Model 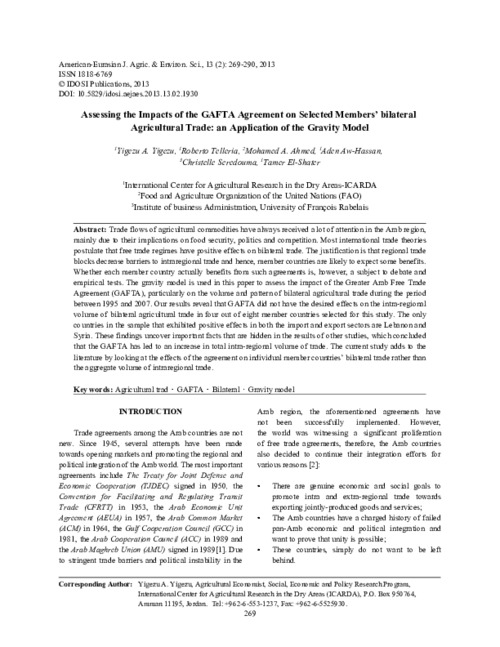 Trade flows of agricultural commodities have always received a lot of attention in the Arab region, mainly due to their implications on food security, politics and competition. Most international trade theories postulate that free trade regimes have positive effects on bilateral trade. The justification is that regional trade blocks decrease barriers to intraregional trade and hence, member countries are likely to expect some benefits. Whether each member country actually benefits from such agreements is, however, a subject to debate and empirical tests. The gravity model is used in this paper to assess the impact of the Greater Arab Free Trade Agreement (GAFTA), particularly on the volume and pattern of bilateral agricultural trade during the period between 1995 and 2007. Our results reveal that GAFTA did not have the desired effects on the intra-regional volume of bilateral agricultural trade in four out of eight member countries selected for this study. The only countries in the sample that exhibited positive effects in both the import and export sectors are Lebanon and Syria. These findings uncover important facts that are hidden in the results of other studies, which concluded that the GAFTA has led to an increase in total intra-regional volume of trade. The current study adds to the literature by looking at the effects of the agreement on individual member countries’ bilateral trade rather than the aggregate volume of intraregional trade.