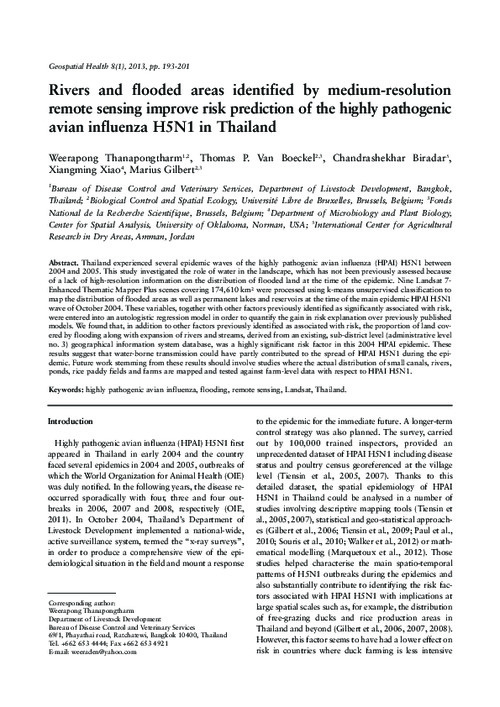 Thailand experienced several epidemic waves of the highly pathogenic avian influenza (HPAI) H5N1 between 2004 and 2005. This study investigated the role of water in the landscape, which has not been previously assessed because of a lack of high-resolution information on the distribution of flooded land at the time of the epidemic. Nine Landsat 7 - Enhanced Thematic Mapper Plus scenes covering 174,610 km(2) were processed using k-means unsupervised classification to map the distribution of flooded areas as well as permanent lakes and reservoirs at the time of the main epidemic HPAI H5N1 wave of October 2004. These variables, together with other factors previously identified as significantly associated with risk, were entered into an autologistic regression model in order to quantify the gain in risk explanation over previously published models. We found that, in addition to other factors previously identified as associated with risk, the proportion of land covered by flooding along with expansion of rivers and streams, derived from an existing, sub-district level (administrative level no. 3) geographical information system database, was a highly significant risk factor in this 2004 HPAI epidemic. These results suggest that water-borne transmission could have partly contributed to the spread of HPAI H5N1 during the epidemic. Future work stemming from these results should involve studies where the actual distribution of small canals, rivers, ponds, rice paddy fields and farms are mapped and tested against farm-level data with respect to HPAI H5N1.