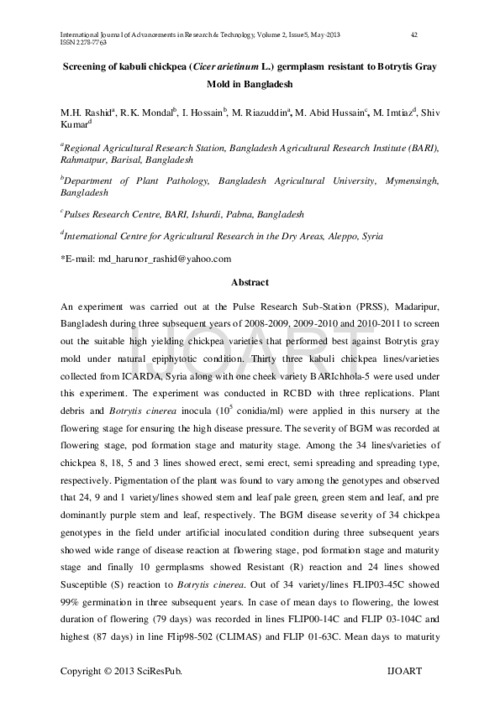 An experiment was carried out at the Pulse Research Sub-Station (PRSS), Madaripur, Bangladesh during three subsequent years of 2008-2009, 2009-2010 and 2010-2011 to screen out the suitable high yielding chickpea varieties that performed best against Botrytis gray mold under natural epiphytotic condition. Thirty three kabuli chickpea lines/varieties collected from ICARDA, Syria along with one cheek variety BARIchhola-5 were used under this experiment. The experiment was conducted in RCBD with three replications. Plant debris and Botrytis cinerea inocula (105 conidia/ml) were applied in this nursery at the flowering stage for ensuring the high disease pressure. The severity of BGM was recorded at flowering stage, pod formation stage and maturity stage. Among the 34 lines/varieties of chickpea 8, 18, 5 and 3 lines showed erect, semi erect, semi spreading and spreading type, respectively. Pigmentation of the plant was found to vary among the genotypes and observed that 24, 9 and 1 variety/lines showed stem and leaf pale green, green stem and leaf, and pre dominantly purple stem and leaf, respectively. The BGM disease severity of 34 chickpea genotypes in the field under artificial inoculated condition during three subsequent years showed wide range of disease reaction at flowering stage, pod formation stage and maturity stage and finally 10 germplasms showed Resistant (R) reaction and 24 lines showed Susceptible (S) reaction to Botrytis cinerea. Out of 34 variety/lines FLIP03-45C showed 99% germination in three subsequent years. In case of mean days to flowering, the lowest duration of flowering (79 days) was recorded in lines FLIP00-14C and FLIP 03-104C and highest (87 days) in line FIip98-502 (CLIMAS) and FLIP 01-63C. Mean days to maturity IJOART ranged from 120-128 days. The line FLIP03-141C was found early maturity (120 days). The mean plant height ranged from 35.14 – 67.85cm while the tallest plant was found in line FLIP98-206C and the shortest plant was recorded in BARIchhola-5. The highest mean number of branch (8) was recorded in ILC-1929 and the lowest number (4) in lines FLIPO2-47C and FLIPO3-36C. Number of total pods per plant ranged from 12 to 37, while the lowest number of pods (12) was recorded in FLIPO3-45C and the highest number of pods was recorded in BARIchhola-5. A significant variation 12.88-33.67g was observed among the lines/varieties in 100-seeds weight. The highest (33.67g) weight was recorded in FLIP03-141C and the lowest (12.88g) weight was recorded in BARIchhola-5. It was observed that yield performance of all the lines differs significantly. It ranged from 377-1961 kg/ha. The maximum yield (1961) was recorded in FLIP03-141C and the minimum yield was recorded in line FLIP03-36C