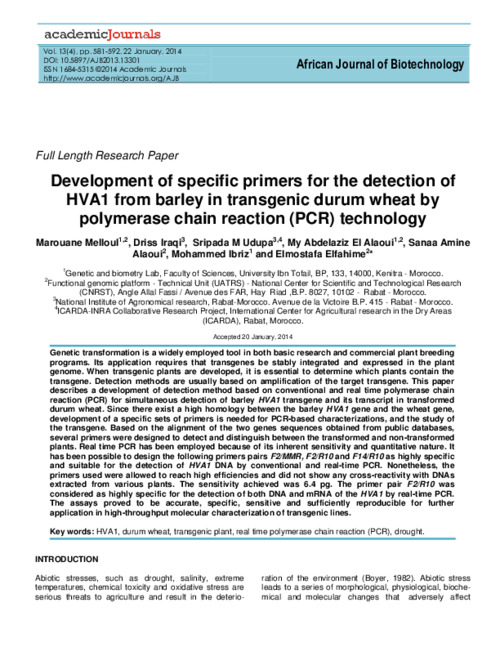 Genetic transformation is a widely employed tool in both basic research and commercial plant breeding programs. Its application requires that transgenes be stably integrated and expressed in the plant genome. When transgenic plants are developed, it is essential to determine which plants contain the transgene. Detection methods are usually based on amplification of the target transgene. This paper describes a development of detection method based on conventional and real time polymerase chain reaction (PCR) for simultaneous detection of barley HVA1 transgene and its transcript in transformed durum wheat. Since there exist a high homology between the barley HVA1 gene and the wheat gene, development of a specific sets of primers is needed for PCR-based characterizations, and the study of the transgene. Based on the alignment of the two genes sequences obtained from public databases, several primers were designed to detect and distinguish between the transformed and non-transformed plants. Real time PCR has been employed because of its inherent sensitivity and quantitative nature. It has been possible to design the following primers pairs F2/MMR, F2/R10 and F14/R10 as highly specific and suitable for the detection of HVA1 DNA by conventional and real-time PCR. Nonetheless, the primers used were allowed to reach high efficiencies and did not show any cross-reactivity with DNAs extracted from various plants. The sensitivity achieved was 6.4 pg. The primer pair F2/R10 was considered as highly specific for the detection of both DNA and mRNA of the HVA1 by real-time PCR. The assays proved to be accurate, specific, sensitive and sufficiently reproducible for further application in high-throughput molecular characterization of transgenic lines.