Cactus as a Tool to Mitigate Drought and to Combat Desertification 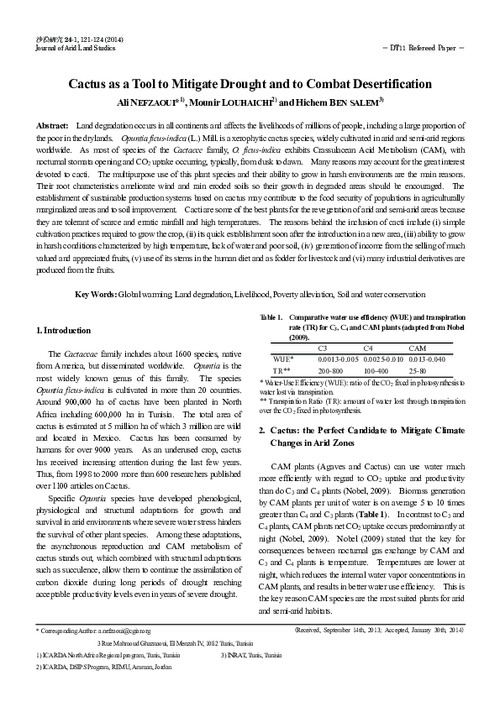 Land degradation occurs in all continents and affects the livelihoods of millions of people, including a large proportion of the poor in the drylands. Opuntiaficus-indica (L.) Mill. is a xerophytic cactus species, widely cultivated in arid and semi-arid regions worldwide. As most of species of the Cactacee family, 0. fiCUS-indica exhibits Crassulacean Acid Metabolism (CAM), with nocturnal stomata opening and C02 uptake occurring, typically, from dusk to dawn. Many reasons may account for the great interest devoted to cacti. The multipurpose use of this plant species and their ability to grow in harsh environments are the main reasons. Their root characteristics ameliorate wind and rain eroded soils so their growth in degraded areas should be encouraged. The establishment of sustainable production systems based on cactus may contribute to the food security of populations in agriculturally marginalized areas and to soil improvement. Cacti are some of the best plants for the revegetation of arid and semi-arid areas because they are tolerant of scarce and erratic rainfall and high temperatures. The reasons behind the inclusion of cacti include (i) simple cultivation practices required to grow the crop, (ii) its quick establishment soon after the introduction in a new area, (iii) ability to grow in harsh conditions characterized by high temperature, lack of water and poor soil, (iv) generation of income from the selling of much valued and appreciated fruits, (v) use of its stems in the human diet and as fodder for livestock and (vi) many industrial derivatives are produced from the fruits.