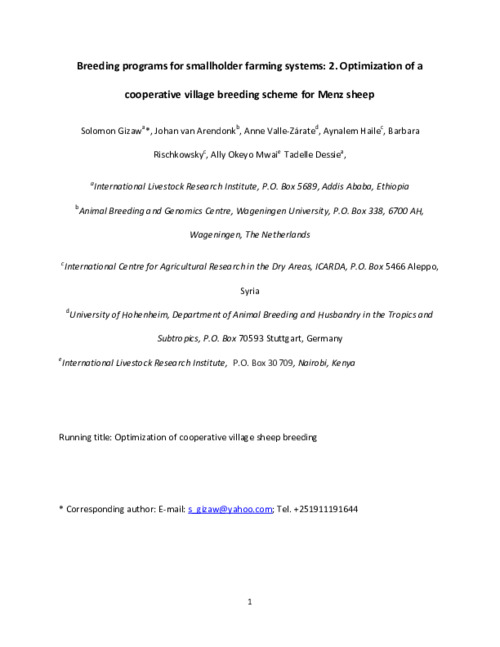 A simulation study was conducted to optimize a cooperative village-based sheep breeding scheme for Menz sheep of Ethiopia. Genetic gains and profits were estimated under nine levels of farmers’ participation and three scenarios of controlled breeding achieved in the breeding programme, as well as under three cooperative flock sizes, ewe to ram mating ratios and durations of ram use for breeding. Under fully controlled breeding, that is, when there is no gene flow between participating (P) and non-participating (NP) flocks, profits ranged from Birr 36.9 at 90% of participation to Birr 21.3 at 10% of participation. However, genetic progress was not affected adversely. When there was gene flow from the NP to P flocks, profits declined from Birr 28.6 to Birr 3.7 as participation declined from 90 to 10%. Under the two-way gene flow model (i.e. when P and NP flocks are herded mixed in communal grazing areas), NP flocks benefited from the genetic gain achieved in the P flocks, but the benefits declined sharply when participation declined beyond 60%. Our results indicate that a cooperative breeding group can be established with as low as 600 breeding ewes mated at a ratio of 45 ewes to one ram, and the rams being used for breeding for a period of two years. This study showed that farmer cooperation is crucial to effect genetic improvement under smallholder low-input sheep farming systems.