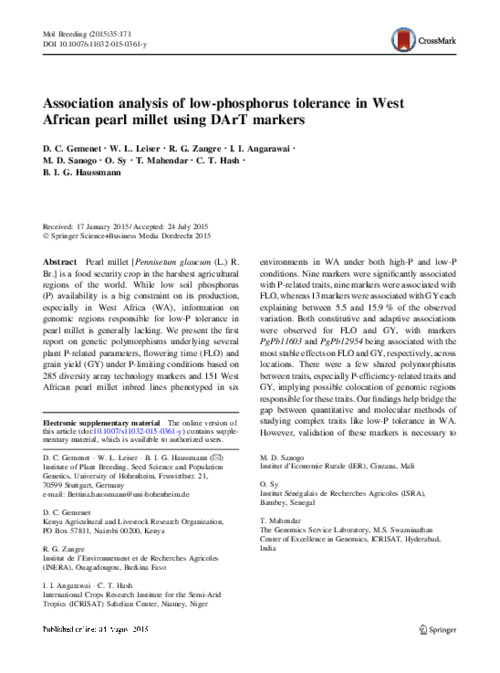 Pearl millet [Pennisetum glaucum (L.) R. Br.] is a food security crop in the harshest agricultural regions of the world. While low soil phosphorus (P) availability is a big constraint on its production, especially in West Africa (WA), information on genomic regions responsible for low-P tolerance in pearl millet is generally lacking. We present the first report on genetic polymorphisms underlying several plant P-related parameters, flowering time (FLO) and grain yield (GY) under P-limiting conditions based on 285 diversity array technology markers and 151 West African pearl millet inbred lines phenotyped in six environments in WA under both high-P and low-P conditions. Nine markers were significantly associated with P-related traits, nine markers were associated with FLO, whereas 13 markers were associated with GY each explaining between 5.5 and 15.9 % of the observed variation. Both constitutive and adaptive associations were observed for FLO and GY, with markers PgPb11603 and PgPb12954 being associated with the most stable effects on FLO and GY, respectively, across locations. There were a few shared polymorphisms between traits, especially P-efficiency-related traits and GY, implying possible colocation of genomic regions responsible for these traits. Our findings help bridge the gap between quantitative and molecular methods of studying complex traits like low-P tolerance in WA. However, validation of these markers is necessary to determine their potential applicability in marker-assisted selection programs targeting low-P environments, which are especially important in WA where resource-poor farmers are expected to be the hardest hit by the approaching global P crisis.