Potential of Wild relatives in Sorghum Improvement through Molecular Approaches 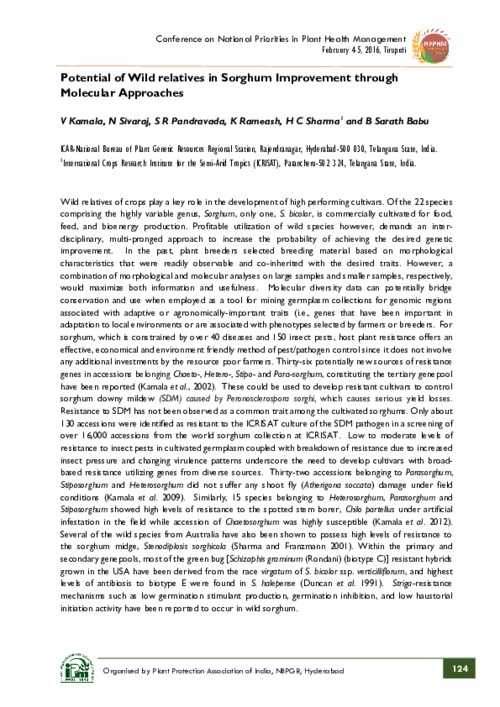 Wild relatives of crops play a key role in the development of high performing cultivars. Of the 22 species comprising the highly variable genus, Sorghum, only one, S. bicolor, is commercially cultivated for food, feed, and bioenergy production. Profitable utilization of wild species however, demands an interdisciplinary, multi-pronged approach to increase the probability of achieving the desired genetic improvement. In the past, plant breeders selected breeding material based on morphological characteristics that were readily observable and co-inherited with the desired traits. However, a combination of morphological and molecular analyses on large samples and smaller samples, respectively, would maximize both information and usefulness. Molecular diversity data can potentially bridge conservation and use when employed as a tool for mining germplasm collections for genomic regions associated with adaptive or agronomically-important traits (i.e., genes that have been important in adaptation to local environments or are associated with phenotypes selected by farmers or breeders. For sorghum, which is constrained by over 40 diseases and 150 insect pests, host plant resistance offers an effective, economical and environment friendly method of pest/pathogen control since it does not involve any additional investments by the resource poor farmers. Thirty-six potentially new sources of resistance genes in accessions belonging Chaeto-, Hetero-, Stipo- and Para-sorghum, constituting the tertiary genepool have been reported (Kamala et al., 2002). These could be used to develop resistant cultivars to control sorghum downy mildew (SDM) caused by Peronosclerospora sorghi, which causes serious yield losses. Resistance to SDM has not been observed as a common trait among the cultivated sorghums. Only about 130 accessions were identified as resistant to the ICRISAT culture of the SDM pathogen in a screening of over 16,000 accessions from the world sorghum collection at ICRISAT. Low to moderate levels of resistance to insect pests in cultivated germplasm coupled with breakdown of resistance due to increased insect pressure and changing virulence patterns underscore the need to develop cultivars with broadbased resistance utilizing genes from diverse sources. Thirty-two accessions belonging to Parasorghum, Stiposorghum and Heterosorghum did not suffer any shoot fly (Atherigona soccata) damage under field conditions (Kamala et al. 2009). Similarly, 15 species belonging to Heterosorghum, Parasorghum and Stiposorghum showed high levels of resistance to the spotted stem borer, Chilo partellus under artificial infestation in the field while accession of Chaetosorghum was highly susceptible (Kamala et al. 2012). Several of the wild species from Australia have also been shown to possess high levels of resistance to the sorghum midge, Stenodiplosis sorghicola (Sharma and Franzmann 2001). Within the primary and secondary genepools, most of the green bug [Schizaphis graminum (Rondani) (biotype C)] resistant hybrids grown in the USA have been derived from the race virgatum of S. bicolor ssp. verticilliflorum, and highest levels of antibiosis to biotype E were found in S. halepense (Duncan et al. 1991). Striga-resistance mechanisms such as low germination stimulant production, germination inhibition, and low haustorial initiation activity have been reported to occur in wild sorghum.