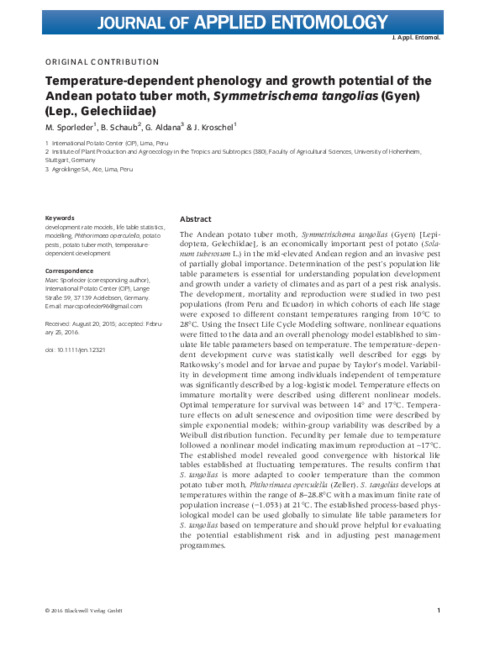 The Andean potato tuber moth, Symmetrischema tangolias (Gyen) [Lepidoptera, Gelechiidae], is an economically important pest of potato (Solanum tuberosum L.) in the mid-elevated Andean region and an invasive pest of partially global importance. Determination of the pest’s population life table parameters is essential for understanding population development and growth under a variety of climates and as part of a pest risk analysis. The development, mortality and reproduction were studied in two pest populations (from Peru and Ecuador) in which cohorts of each life stage were exposed to different constant temperatures ranging from 10°C to 28°C. Using the Insect Life Cycle Modeling software, nonlinear equations were fitted to the data and an overall phenology model established to simulate life table parameters based on temperature. The temperature-dependent development curve was statistically well described for eggs by Ratkowsky’s model and for larvae and pupae by Taylor’s model. Variability in development time among individuals independent of temperature was significantly described by a log-logistic model. Temperature effects on immature mortality were described using different nonlinear models. Optimal temperature for survival was between 14° and 17°C. Temperature effects on adult senescence and oviposition time were described by simple exponential models; within-group variability was described by a Weibull distribution function. Fecundity per female due to temperature followed a nonlinear model indicating maximum reproduction at ~17°C. The established model revealed good convergence with historical life tables established at fluctuating temperatures. The results confirm that S. tangolias is more adapted to cooler temperature than the common potato tuber moth, Phthorimaea operculella (Zeller). S. tangolias develops at temperatures within the range of 8–28.8°C with a maximum finite rate of population increase (=1.053) at 21°C. The established process-based physiological model can be used globally to simulate life table parameters for S. tangolias based on temperature and should prove helpful for evaluating the potential establishment risk and in adjusting pest management programmes.