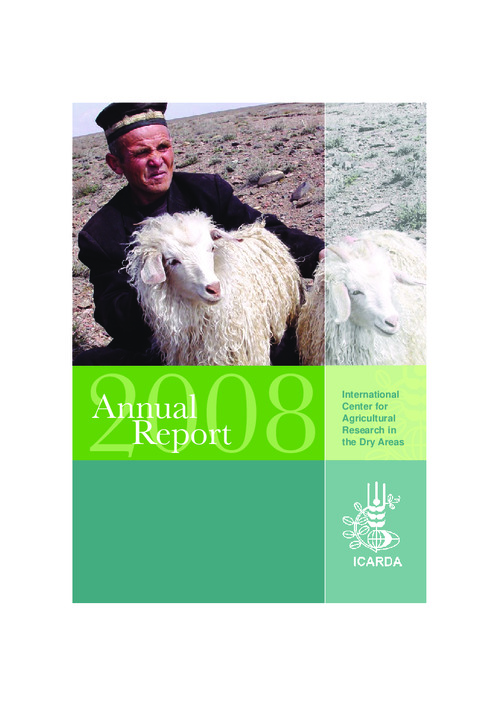 The year of 2008 marked the beginning of a new phase at ICARDA: the full implementation of the Center's Strategic Plan 2007-2016, and a renewed commitment to addressing the global challenges of food security, poverty alleviation and climate change in the dry areas. It was also a year of adversity, both locally and globally. At ICARDA's main research station in Syria, the 2007/2008 cropping season experienced drought combined with wide variations in temperature, falling to -12°C in winter and rising to 37°C in the early spring. This was the driest season in 38 years, with only 210 mm annual rainfall compared with the long-term average of 340 mm. Countries in West Asia and North Africa harvested only 40 to 50% of their normal rainfed crop production. In these adverse conditions, we were pleased to see that lines of cereals and legumes developed jointly with our partners performed well. 2008 also witnessed global foodprice and economic crises and the specter of widespread food insecurity. Many countries in the dry areas that ICARDA serves were severely affected due to their dependence on cereal imports to meet their food demands. Their vulnerability to such fluctuations in global markets is exacerbated by low agricultural productivity and the prospects of climate change. The food crisis was a reminder of the vital role that agricultural research plays in ensuring food security and sustainable development. The UN Secretary General urged nations to revitalize agriculture as a way of tackling the food crisis. The World Development Report 2008: Agriculture for Development underscored the importance of agriculture as the main engine of economic growth and rural development. ICARDA has been called upon by many national governments to assist in developing research and capacity development programs to enhance food security. The 2007/2008 season at ICARDA was only one example of the intrinsic variability in climatic conditions, both within and between seasons, in dry areas and provides a foretaste of future conditions. Climate models predict even more variability, aggravating the problems already facing farmers – highly variable rainfall, frequent drought, extremes of heat and cold, fragile ecosystems beset by land degradation, salinization, loss of biodiversity, and a host of plant diseases and insect pests. ICARDA brings its past experience in addressing climatic variability to bear on tackling the effects of climate change more broadly, with greater emphasis on adaptation, mitigation, and ecosystem resilience. Many technologies developed by ICARDA and its partners will have direct and immediate benefits in strengthening communities' capacity to adapt to climate change. This Annual Report presents highlights of the Center's achievements in 2008 and examples of the integrated research approach that ICARDA takes in addressing its goals of achieving sustainable increases in agricultural productivity and income, while ensuring the efficient and more equitable use and conservation of natural resources. As we reflect on 2008, and the challenges that it presented, ICARDA is even more conscious of the importance of collaboration and partnerships, particularly with the national programs of the countries the Center serves, in improving livelihoods and alleviating poverty in the dry areas.