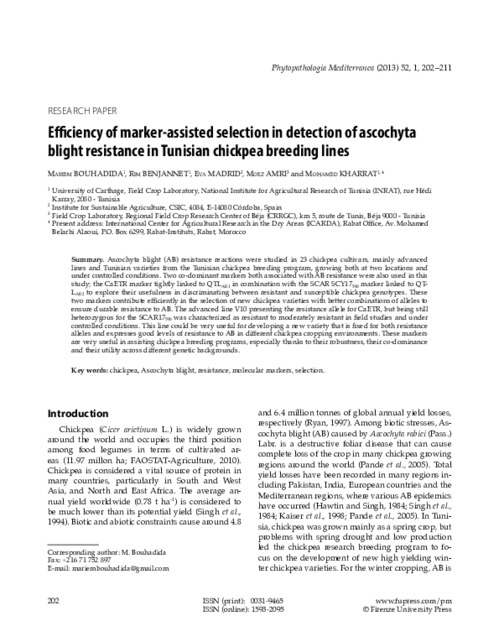 Ascochyta blight (AB) resistance reactions were studied in 23 chickpea cultivars, mainly advanced lines and Tunisian varieties from the Tunisian chickpea breeding program, growing both at two locations and under controlled conditions. Two co-dominant markers both associated with AB resistance were also used in this study; the CaETR marker tightly linked to QTLAR1 in combination with the SCAR SCY17590 marker linked to QTLAR2 to explore their usefulness in discriminating between resistant and susceptible chickpea genotypes. These two markers contribute efficiently in the selection of new chickpea varieties with better combinations of alleles to ensure durable resistance to AB. The advanced line V10 presenting the resistance allele for CaETR, but being still heterozygous for the SCAR17590 was characterized as resistant to moderately resistant in field studies and under controlled conditions. This line could be very useful for developing a new variety that is fixed for both resistance alleles and expresses good levels of resistance to AB in different chickpea cropping environments. These markers are very useful in assisting chickpea breeding programs, especially thanks to their robustness, their co-dominance and their utility across different genetic backgrounds.