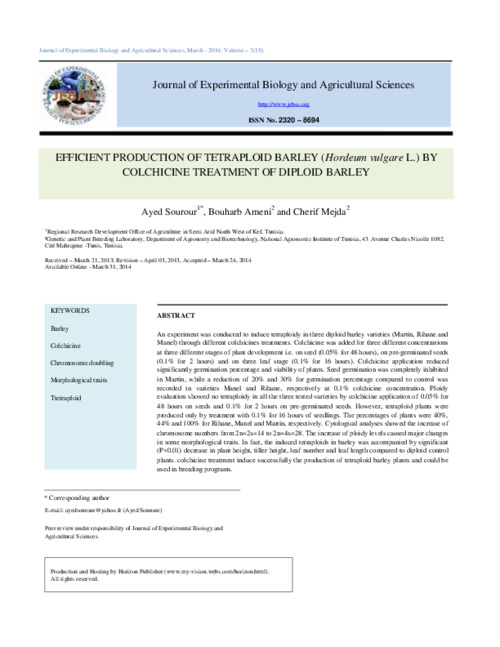 An experiment was conducted to induce tetraploidy in three diploid barley varieties (Martin, Rihane and Manel) through different colchicines treatments. Colchicine was added for three different concentrations at three different stages of plant development i.e. on seed (0.05% for 48 hours), on pre-germinated seeds (0.1% for 2 hours) and on three leaf stage (0.1% for 16 hours). Colchicine application reduced significantly germination percentage and viability of plants. Seed germination was completely inhibited in Martin, while a reduction of 20% and 30% for germination percentage compared to control was recorded in varieties Manel and Rihane, respectively at 0.1% colchicine concentration. Ploidy evaluation showed no tetraploidy in all the three tested varieties by colchicine application of 0.05% for 48 hours on seeds and 0.1% for 2 hours on pre-germinated seeds. However, tetraploid plants were produced only by treatment with 0.1% for 16 hours of seedlings. The percentages of plants were 40%, 44% and 100% for Rihane, Manel and Martin, respectively. Cytological analyses showed the increase of chromosome numbers from 2n=2x=14 to 2n=4x=28. The increase of ploidy levels caused major changes in some morphological traits. In fact, the induced tetraploids in barley was accompanied by significant (P<0.01) decrease in plant height, tiller height, leaf number and leaf length compared to diploid control plants. colchicine treatment induce successfully the production of tetraploid barley plants and could be used in breeding programs.