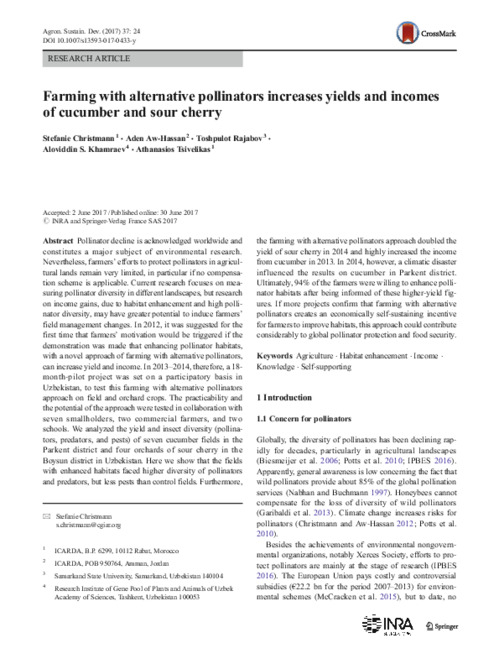 Pollinator decline is acknowledged worldwide and constitutes a major subject of environmental research. Nevertheless, farmers’ efforts to protect pollinators in agricultural lands remain very limited, in particular if no compensation scheme is applicable. Current research focuses on measuring pollinator diversity in different landscapes, but research on income gains, due to habitat enhancement and high pollinator diversity, may have greater potential to induce farmers’ field management changes. In 2012, it was suggested for the first time that farmers’ motivation would be triggered if the demonstration was made that enhancing pollinator habitats, with a novel approach of farming with alternative pollinators, can increase yield and income. In 2013–2014, therefore, a 18-month-pilot project was set on a participatory basis in Uzbekistan, to test this farming with alternative pollinators approach on field and orchard crops. The practicability and the potential of the approach were tested in collaboration with seven smallholders, two commercial farmers, and two schools. We analyzed the yield and insect diversity (pollinators, predators, and pests) of seven cucumber fields in the Parkent district and four orchards of sour cherry in the Boysun district in Uzbekistan. Here we show that the fields with enhanced habitats faced higher diversity of pollinators and predators, but less pests than control fields. Furthermore, the farming with alternative pollinators approach doubled the yield of sour cherry in 2014 and highly increased the income from cucumber in 2013. In 2014, however, a climatic disaster influenced the results on cucumber in Parkent district. Ultimately, 94% of the farmers were willing to enhance pollinator habitats after being informed of these higher-yield figures. If more projects confirm that farming with alternative pollinators creates an economically self-sustaining incentive for farmers to improve habitats, this approach could contribute considerably to global pollinator protection and food security.