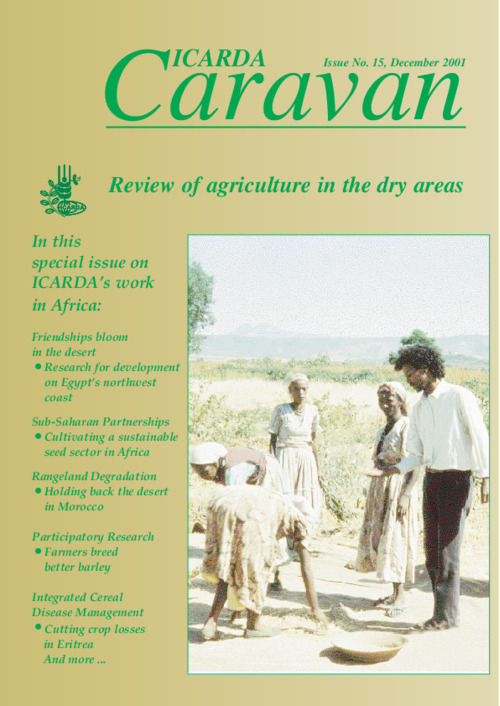 ICARDA serves its African stakeholders through two of its seven regional programs. These are the Nile Valley and Red Sea Regional Program (NVRSRP), which covers Egypt, Ethiopia, Eritrea, and Sudan; and the North Africa Regional Program (NARP), which covers Algeria, Morocco, Mauritania, Libya, and Tunisia. Partnership and cooperation are key components of ICARDA’s strategy in improving the welfare of resource-poor farmers. Germplasm improvement, in cooperation with national programs in Sudan, Ethiopia, Eritrea, and countries in North Africa, has led to the development of superior crop varieties, many of which have been successfully introduced in most of these countries, as well as elsewhere. For example, in Sudan, improved cultivars of heat-tolerant bread wheat have helped in expanding the area of this strategic crop well beyond its traditional limits and have led to enhanced food security. Improved disease and pest-resistant lines of faba bean, lentil, and chickpea have been developed for Sudan to provide a cheap source of good quality protein. In Ethiopia and Eritrea, major progress has been made in developing barley varieties with higher yield and disease and pest resistance. A major achievement in Ethiopia has been the development of low-neurotoxin and high-yielding cultivars of grasspea, safe for human consumption. A protein-rich legume, grasspea is the only hope for the poor in times of drought, but it contains a neurotoxin that causes paralysis of the legs. Ethiopia has also released new disease-resistant varieties of faba bean, chickpea, and lentil, which are key components of the farming system and the diet of the poor in the country. In Morocco, a joint effort with national researchers has resulted in the release of improved durum wheat cultivars that carry resistance to Hessian fly, a devastating insect pest. By using these varieties, farmers in the dry areas of Morocco alone could prevent wheat crop losses worth an estimated US$20 million annually. In other countries of North Africa, ICARDA is involved in the improvement of indigenous water-harvesting techniques, such as the jessour system, which originated in ancient times. People designing such water capture and retention systems relied previously on visual assessment of prospective catchment and feeder areas. By using satellite mapping and geographic information systems (GIS), researchers are now able to computer-design accurate catchment systems to harvest the greatest possible amount of useful water.