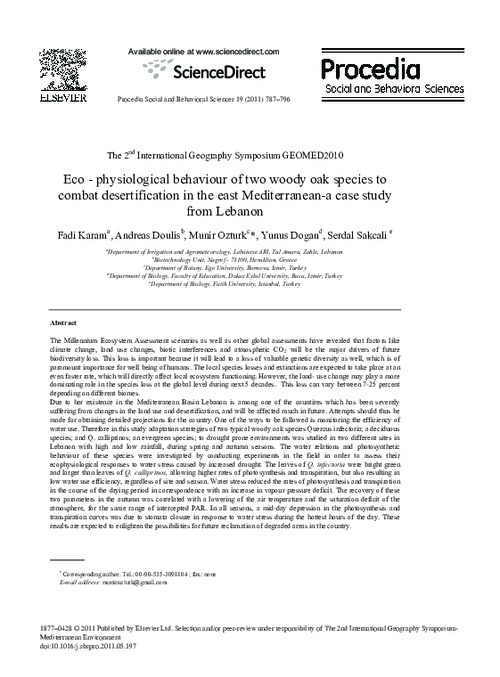 The Millennium Ecosystem Assessment scenarios as well as other global assessments have revealed that factors like climate change, land use changes, biotic interferences and atmospheric CO2 will be the major drivers of future biodiversity loss. This loss is important because it will lead to a loss of valuable genetic diversity as well, which is of paramount importance for well being of humans. The local species losses and extinctions are expected to take place at an even faster rate, which will directly affect local ecosystem functioning. However, the land- use change may play a more dominating role in the species loss at the global level during next 5 decades. This loss can vary between 7-25 percent depending on different biomes. Due to her existence in the Mediterranean Basin Lebanon is among one of the countires which has been severely suffering from changes in the land use and desertification, and will be affected much in future. Attempts should thus be made for obtaining detailed projections for the country. One of the ways to be followed is monitoring the efficiency of water use. Therefore in this study adaptation strategies of two typical woody oak species Quercus infectoria; a deciduous species; and Q. calliprinos; an evergreen species; to drought prone environments was studied in two different sites in Lebanon with high and low rainfall, during spring and autumn seasons. The water relations and photosynthetic behaviour of these species were investigated by conducting experiments in the field in order to assess their ecophysiological responses to water stress caused by increased drought. The leaves of Q. infectoria were bright green and larger than leaves of Q. calliprinos, allowing higher rates of photosynthesis and transpiration, but also resulting in low water use efficiency, regardless of site and season. Water stress reduced the rates of photosynthesis and transpiration in the course of the drying period in correspondence with an increase in vapour pressure deficit. The recovery of these two parameters in the autumn was correlated with a lowering of the air temperature and the saturation deficit of the atmosphere, for the same range of intercepted PAR. In all seasons, a mid-day depression in the hotosynthesis and transpiration curves was due to stomata closure in response to water stress during the hottest hours of the day. These results are expected to enlighten the possibilities for future reclamation of degraded areas in the country.