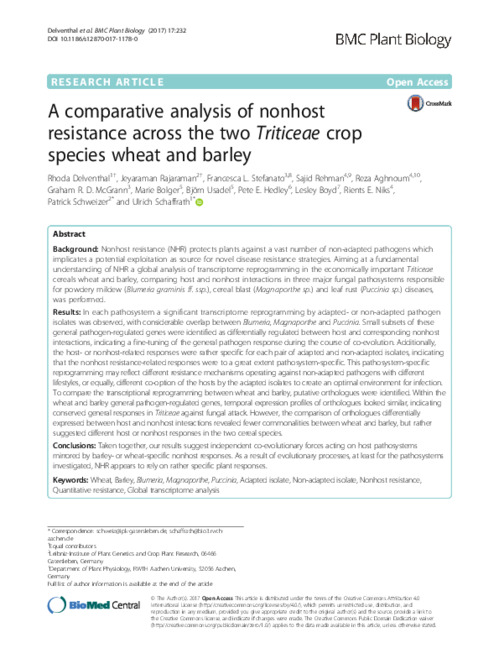 Background: Nonhost resistance (NHR) protects plants against a vast number of non-adapted pathogens which implicates a potential exploitation as source for novel disease resistance strategies. Aiming at a fundamental understanding of NHR a global analysis of transcriptome reprogramming in the economically important Triticeae cereals wheat and barley, comparing host and nonhost interactions in three major fungal pathosystems responsible for powdery mildew (Blumeria graminis ff. ssp.), cereal blast (Magnaporthe sp.) and leaf rust (Puccinia sp.) diseases, was performed. Results: In each pathosystem a significant transcriptome reprogramming by adapted- or non-adapted pathogen isolates was observed, with considerable overlap between Blumeria, Magnaporthe and Puccinia. Small subsets of these general pathogen-regulated genes were identified as differentially regulated between host and corresponding nonhost interactions, indicating a fine-tuning of the general pathogen response during the course of co-evolution. Additionally, the host- or nonhost-related responses were rather specific for each pair of adapted and non-adapted isolates, indicating that the nonhost resistance-related responses were to a great extent pathosystem-specific. This pathosystem-specific reprogramming may reflect different resistance mechanisms operating against non-adapted pathogens with different lifestyles, or equally, different co-option of the hosts by the adapted isolates to create an optimal environment for infection. To compare the transcriptional reprogramming between wheat and barley, putative orthologues were identified. Within the wheat and barley general pathogen-regulated genes, temporal expression profiles of orthologues looked similar, indicating conserved general responses in Triticeae against fungal attack. However, the comparison of orthologues differentially expressed between host and nonhost interactions revealed fewer commonalities between wheat and barley, but rather suggested different host or nonhost responses in the two cereal species. Conclusions: Taken together, our results suggest independent co-evolutionary forces acting on host pathosystems mirrored by barley- or wheat-specific nonhost responses. As a result of evolutionary processes, at least for the pathosystems investigated, NHR appears to rely on rather specific plant responses