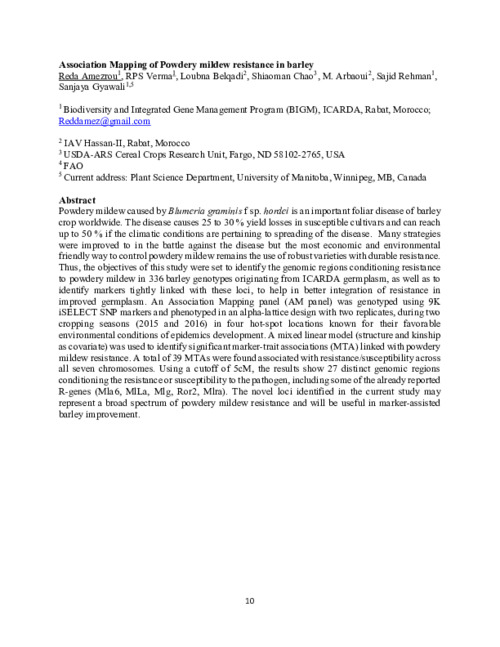 Powdery mildew caused by Blumeria graminis f sp. hordei is an important foliar disease of barley crop worldwide. The disease causes 25 to 30 % yield losses in susceptible cultivars and can reach up to 50 % if the climatic conditions are pertaining to spreading of the disease. Many strategies were improved to in the battle against the disease but the most economic and environmental friendly way to control powdery mildew remains the use of robust varieties with durable resistance. Thus, the objectives of this study were set to identify the genomic regions conditioning resistance to powdery mildew in 336 barley genotypes originating from ICARDA germplasm, as well as to identify markers tightly linked with these loci, to help in better integration of resistance in improved germplasm. An Association Mapping panel (AM panel) was genotyped using 9K iSELECT SNP markers and phenotyped in an alpha-lattice design with two replicates, during two cropping seasons (2015 and 2016) in four hot-spot locations known for their favorable environmental conditions of epidemics development. A mixed linear model (structure and kinship as covariate) was used to identify significant marker-trait associations (MTA) linked with powdery mildew resistance. A total of 39 MTAs were found associated with resistance/susceptibility across all seven chromosomes. Using a cutoff of 5cM, the results show 27 distinct genomic regions conditioning the resistance or susceptibility to the pathogen, including some of the already reported R-genes (Mla6, MlLa, Mlg, Ror2, Mlra). The novel loci identified in the current study may represent a broad spectrum of powdery mildew resistance and will be useful in marker-assisted barley improvement.