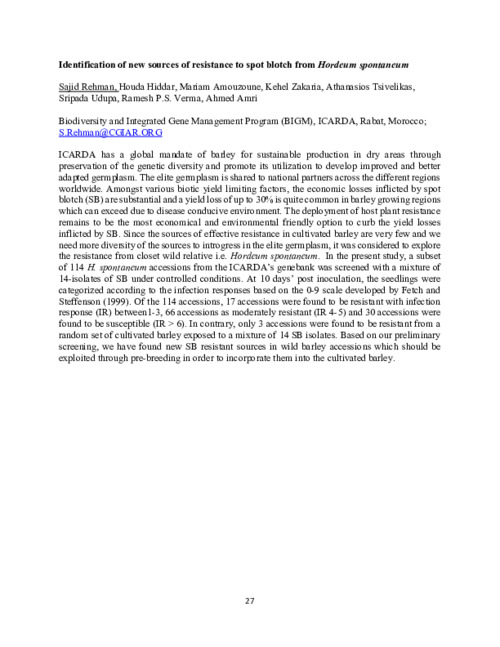 ICARDA has a global mandate of barley for sustainable production in dry areas through preservation of the genetic diversity and promote its utilization to develop improved and better adapted germplasm. The elite germplasm is shared to national partners across the different regions worldwide. Amongst various biotic yield limiting factors, the economic losses inflicted by spot blotch (SB) are substantial and a yield loss of up to 30% is quite common in barley growing regions which can exceed due to disease conducive environment. The deployment of host plant resistance remains to be the most economical and environmental friendly option to curb the yield losses inflicted by SB. Since the sources of effective resistance in cultivated barley are very few and we need more diversity of the sources to introgress in the elite germplasm, it was considered to explore the resistance from closet wild relative i.e. Hordeum spontaneum. In the present study, a subset of 114 H. spontaneum accessions from the ICARDA’s genebank was screened with a mixture of 14-isolates of SB under controlled conditions. At 10 days’ post inoculation, the seedlings were categorized according to the infection responses based on the 0-9 scale developed by Fetch and Steffenson (1999). Of the 114 accessions, 17 accessions were found to be resistant with infection response (IR) between1-3, 66 accessions as moderately resistant (IR 4-5) and 30 accessions were found to be susceptible (IR > 6). In contrary, only 3 accessions were found to be resistant from a random set of cultivated barley exposed to a mixture of 14 SB isolates. Based on our preliminary screening, we have found new SB resistant sources in wild barley accessions which should be exploited through pre-breeding in order to incorporate them into the cultivated barley.