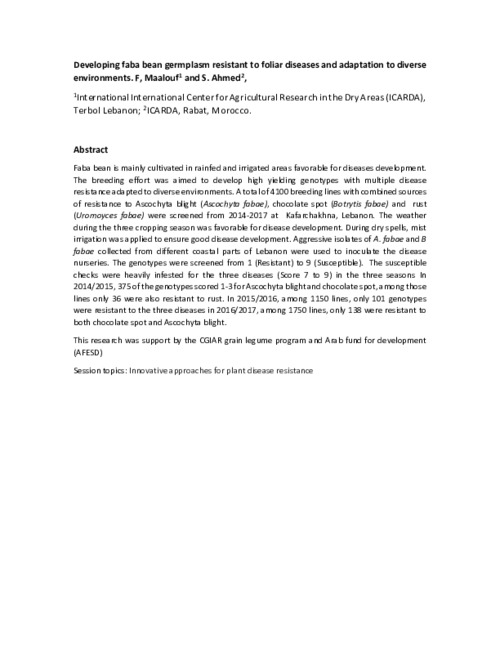 Faba bean is mainly cultivated in rainfed and irrigated areas favorable for diseases development. The breeding effort was aimed to develop high yielding genotypes with multiple disease resistance adapted to diverse environments. A total of 4100 breeding lines with combined sources of resistance to Ascochyta blight (Ascochyta fabae), chocolate spot (Botrytis fabae) and rust (Uromoyces fabae) were screened from 2014-2017 at Kafarchakhna, Lebanon. The weather during the three cropping season was favorable for disease development. During dry spells, mist irrigation was applied to ensure good disease development. Aggressive isolates of A. fabae and B fabae collected from different coastal parts of Lebanon were used to inoculate the disease nurseries. The genotypes were screened from 1 (Resistant) to 9 (Susceptible). The susceptible checks were heavily infested for the three diseases (Score 7 to 9) in the three seasons In 2014/2015, 375 of the genotypes scored 1-3 for Ascochyta blight and chocolate spot, among those lines only 36 were also resistant to rust. In 2015/2016, among 1150 lines, only 101 genotypes were resistant to the three diseases in 2016/2017, among 1750 lines, only 138 were resistant to both chocolate spot and Ascochyta blight.