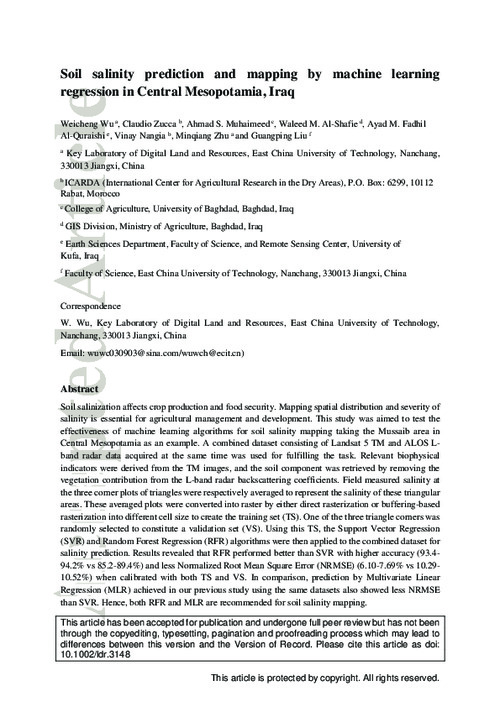 Soil salinization affects crop production and food security. Mapping spatial distribution and severity of salinity is essential for agricultural management and development. This study was aimed to test the effectiveness of machine learning algorithms for soil salinity mapping taking the Mussaib area in Central Mesopotamia as an example. A combined dataset consisting of Landsat 5 Thematic Mapper (TM) and ALOS L‐band radar data acquired at the same time was used for fulfilling the task. Relevant biophysical indicators were derived from the TM images, and the soil component was retrieved by removing the vegetation contribution from the L‐band radar backscattering coefficients. Field‐measured salinity at the three corner plots of triangles were averaged to represent the salinity of these triangular areas. These averaged plots were converted into raster by either direct rasterization or buffering‐based rasterization into different cell size to create the training set (TS). One of the three triangle corners was randomly selected to constitute a validation set (VS). Using this TS, the support vector regression (SVR) and random forest regression (RFR) algorithms were then applied to the combined dataset for salinity prediction. Results revealed that RFR performed better than SVR with higher accuracy (93.4–94.2% vs. 85.2–89.4%) and less normalized root mean square error (NRMSE; 6.10–7.69% vs. 10.29–10.52%) when calibrated with both TS and VS. In comparison, prediction by multivariate linear regression (MLR) achieved in our previous study using the same datasets also showed less NRMSE than SVR. Hence, both RFR and MLR are recommended for soil salinity mapping.