Impact of Crop Improvement and Management Winter-Sown Chickpea in Syria 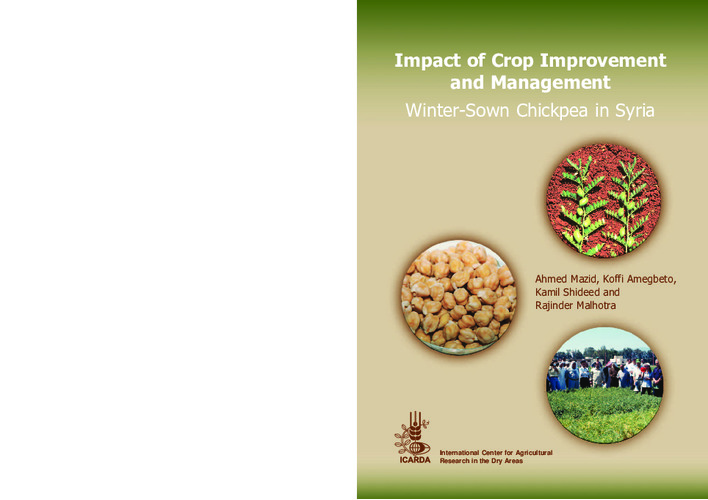 Chickpea (Cicer arietinum L.) is an annual grain legume or 'pulse' crop used extensively for human consumption. Dried chickpea seed is commonly used in soup in India, while in the Middle East and elsewhere it is more frequently cooked and blended with rice dishes. The primary use in Syria is to prepare the homus bet-hina dish or falafel. Major chickpea producing countries include India, Pakistan, Mexico, Turkey, Canada, Syria, and Australia. Chickpea accounts for over 20% of world pulse production, and is the most important pulse crop after dry bean and pea. Chickpea provides important economic advantages to smallholder farm households: it is a source of protein (an alternative to meat) and a source of cash income, and improves soil quality when grown as a break crop in cereal-dominated farming systems. Despite the importance of chickpea, yields in Syria – and many other developing countries – have remained very low. The major constraints to productivity are the low yield potential of landraces, their susceptibility to biotic and abiotic stresses, and poor cultural practices. In Syria, chickpea is traditionally sown during spring on conserved soil moisture, if winter rainfall has been sufficient. Productivity is limited mainly by terminal drought and vascular wilt. With increasing pressure on land in Syria, profitability of spring chickpea is declining relative to other crops. This is a major reason for fluctuating or declining area and production.