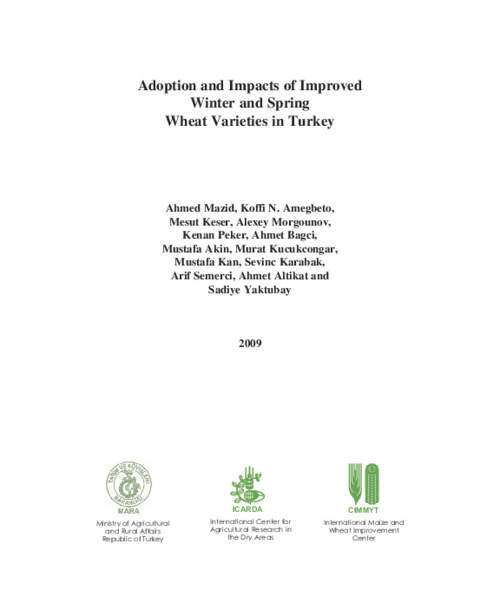 Wheat is one of the few major agricultural commodities in Turkey that ranks the country among the top 10 largest producers in the world. It is the essential food element in the Turkish diet, generally eaten in the form of bread. The total wheat production is estimated at 21 million tons valued roughly at $ 3.3 billion in 2005/06 (FAO, 2008). Value-adding activities of processed products such as bread, bulgur, yufka, cookies make the wheat industry one of the major sectors in the economy. Wheat production increased in the late 1970s enabled the country to become a wheat exporter; however, production slowed down in the 1980s. With its research infrastructure and a core of well-trained scientists, Turkey has made significant contribution to international efforts to improve winter wheat production. Since 1986 the government of Turkey and CIMMYT, joined by ICARDA later in 1990, established the International Winter Wheat Improvement Program (IWWIP). Several improved wheat varieties have been jointly developed, disseminated, and used by producers in the country and elsewhere. Other varieties were also introduced in the country particularly, after agricultural reforms in the 1980s, both private companies and public agencies introduced new varieties at an accelerated rate. However, there has not been a systematic monitoring of the adoption of these varieties and their impacts on producers not evaluated. Key socioeconomic research questions remain unanswered, among them, whether the improved varieties have effectively contributed to achieving the intended impacts.