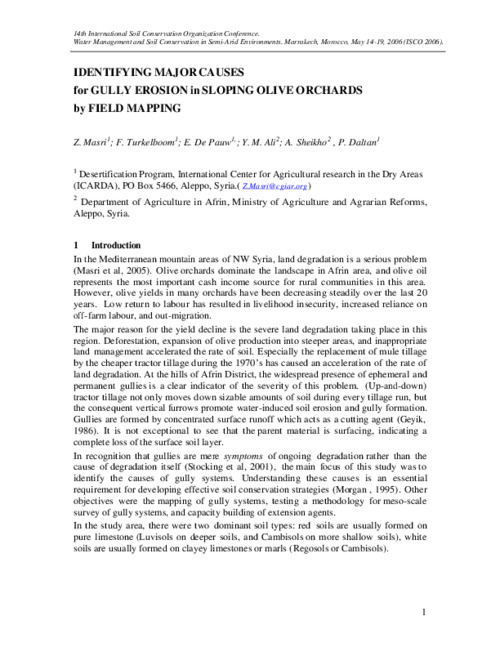 In the Mediterranean mountain areas of NW Syria, land degradation is a serious problem (Masri et al, 2005). Olive orchards dominate the landscape in Afrin area, and olive oil represents the most important cash income source for rural communities in this area. However, olive yields in many orchards have been decreasing steadily over the last 20 years. Low return to labour has resulted in livelihood insecurity, increased reliance on off-farm labour, and out-migration. The major reason for the yield decline is the severe land degradation taking place in this region. Deforestation, expansion of olive production into steeper areas, and inappropriate land management accelerated the rate of soil. Especially the replacement of mule tillage by the cheaper tractor tillage during the 1970’s has caused an acceleration of the rate of land degradation. At the hills of Afrin District, the widespread presence of ephemeral and permanent gullies is a clear indicator of the severity of this problem. (Up-and-down) tractor tillage not only moves down sizable amounts of soil during every tillage run, but the consequent vertical furrows promote water-induced soil erosion and gully formation. Gullies are formed by concentrated surface runoff which acts as a cutting agent (Geyik, 1986). It is not exceptional to see that the parent material is surfacing, indicating a complete loss of the surface soil layer. In recognition that gullies are mere symptoms of ongoing degradation rather than the cause of degradation itself (Stocking et al, 2001), the main focus of this study was to identify the causes of gully systems. Understanding these causes is an essential requirement for developing effective soil conservation strategies (Morgan , 1995). Other objectives were the mapping of gully systems, testing a methodology for meso-scale survey of gully systems, and capacity building of extension agents. In the study area, there were two dominant soil types: red soils are usually formed on pure limestone (Luvisols on deeper soils, and Cambisols on more shallow soils), white soils are usually formed on clayey limestones or marls (Regosols or Cambisols).