Phytoremediation of Sodic and Saline-Sodic Soils 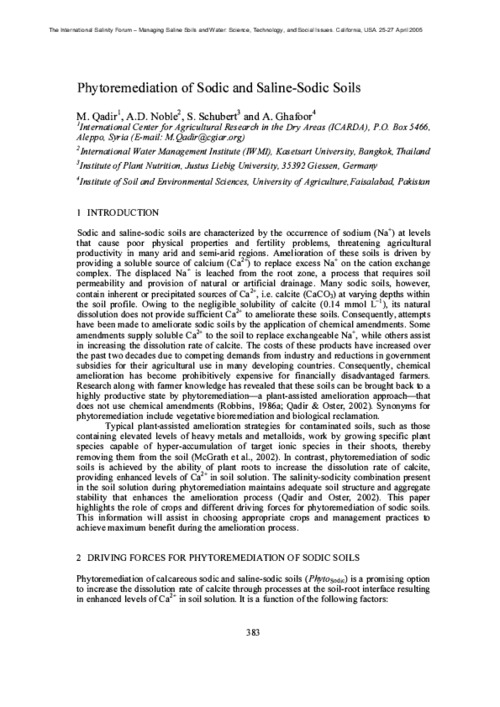 Sodic and saline-sodic soils are characterized by the occurrence of sodium (Na+) at levels that cause poor physical properties and fertility problems, threatening agricultural productivity in many arid and semi-arid regions. Amelioration of these soils is driven by providing a soluble source of calcium (Ca2+) to replace excess Na+ on the cation exchange complex. The displaced Na+ is leached from the root zone, a process that requires soil permeability and provision of natural or artificial drainage. Many sodic soils, however, contain inherent or precipitated sources of Ca2+, i.e. calcite (CaC03) at varying depths within the soil profile. Owing to the negligible solubility of calcite (0.14 mmol L-1), its natural dissolution does not provide sufficient Ca2+ to ameliorate these soils. Consequently, attempts have been made to ameliorate sodic soils by the application of chemical amendments. Some amendments supply soluble Ca2+ to the soil to replace exchangeable Na +, while others assist in increasing the dissolution rate of calcite. The costs of these products have increased over the past two decades due to competing demands from industry and reductions in government subsidies for their agricultural use in many developing countries. Consequently, chemical amelioration has become prohibitively expensive for financially disadvantaged farmers. Research along with farmer knowledge has revealed that these soils can be brought back to a highly productive state by phytoremediation-a plant-assisted amelioration approach-that does not use chemical amendments (Robbins, 1986a; Qadir & Oster, 2002). Synonyms for phytoremediation include vegetative bioremediation and biological reclamation.