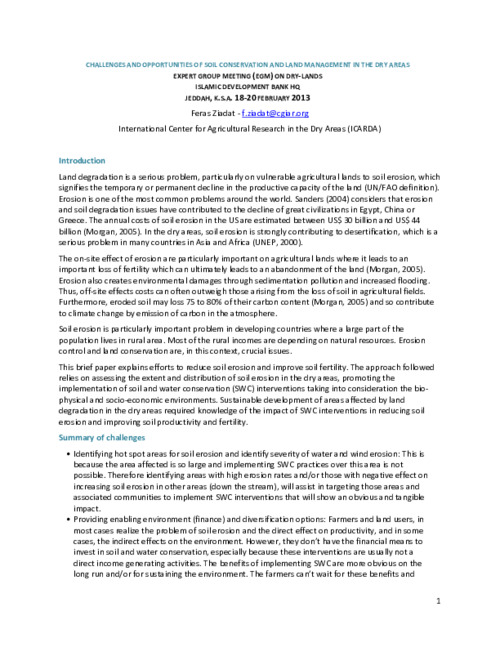 Land degradation is a serious problem, particularly on vulnerable agricultural lands to soil erosion, which signifies the temporary or permanent decline in the productive capacity of the land (UN/FAO definition). Erosion is one of the most common problems around the world. Sanders (2004) considers that erosion and soil degradation issues have contributed to the decline of great civilizations in Egypt, China or Greece. The annual costs of soil erosion in the US are estimated between US$ 30 billion and US$ 44 billion (Morgan, 2005). In the dry areas, soil erosion is strongly contributing to desertification, which is a serious problem in many countries in Asia and Africa (UNEP, 2000). The on-site effect of erosion are particularly important on agricultural lands where it leads to an important loss of fertility which can ultimately leads to an abandonment of the land (Morgan, 2005). Erosion also creates environmental damages through sedimentation pollution and increased flooding. Thus, off-site effects costs can often outweigh those arising from the loss of soil in agricultural fields. Furthermore, eroded soil may loss 75 to 80% of their carbon content (Morgan, 2005) and so contribute to climate change by emission of carbon in the atmosphere. Soil erosion is particularly important problem in developing countries where a large part of the population lives in rural area. Most of the rural incomes are depending on natural resources. Erosion control and land conservation are, in this context, crucial issues. This brief paper explains efforts to reduce soil erosion and improve soil fertility. The approach followed relies on assessing the extent and distribution of soil erosion in the dry areas, promoting the implementation of soil and water conservation (SWC) interventions taking into consideration the biophysical and socio-economic environments. Sustainable development of areas affected by land degradation in the dry areas required knowledge of the impact of SWC interventions in reducing soil erosion and improving soil productivity and fertility.