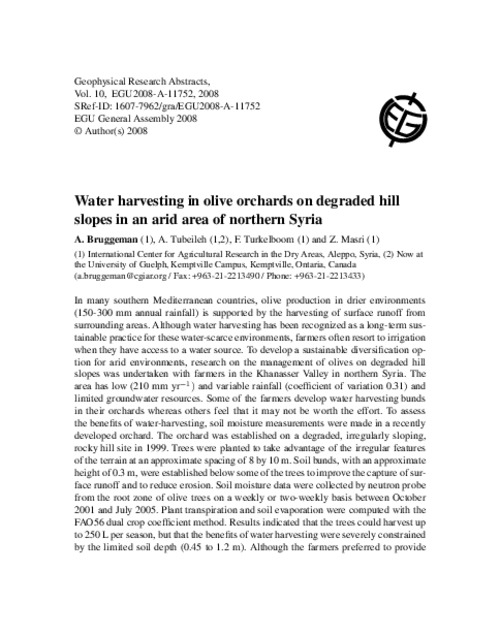 In many southern Mediterranean countries, olive production in drier environments (150-300 mm annual rainfall) is supported by the harvesting of surface runoff from surrounding areas. Although water harvesting has been recognized as a long-term sus-tainable practice for these water-scarce environments, farmers often resort to irrigation when they have access to a water source. To develop a sustainable diversification option for arid environments, research on the management of olives on degraded hill slopes was undertaken with farmers in the Khanasser Valley in northern Syria. The area has low (210 mm yr −1) and variable rainfall (coefficient of variation 0.31) and limited groundwater resources. Some of the farmers develop water harvesting bunds in their orchards whereas others feel that it may not be worth the effort. To assess the benefits of water-harvesting, soil moisture measurements were made in a recently developed orchard. The orchard was established on a degraded, irregularly sloping, rocky hill site in 1999. Trees were planted to take advantage of the irregular features of the terrain at an approximate spacing of 8 by 10 m. Soil bunds, with an approximate height of 0.3 m, were established below some of the trees to improve the capture of surface runoff and to reduce erosion. Soil moisture data were collected by neutron probe from the root zone of olive trees on a weekly or two-weekly basis between October 2001 and July 2005. Plant transpiration and soil evaporation were computed with the FAO56 dual crop coefficient method. Results indicated that the trees could harvest up to 250 L per season, but that the benefits of water harvesting were severely constrained by the limited soil depth (0.45 to 1.2 m). Although the farmers preferred to provide the trees with a few irrigations from a tractor-pulled tanker during the hot summer months, the local drought-tolerant 'Qaisi' variety also survived without supplemental irrigation. The recent increase in orchards on the degraded hill slopes of the valley is a clear sign that farmers have accepted olives as an alternative to the uncontrolled grazing and degradation of this land, but the widespread adoption of water-harvesting practices will require additional extension efforts.