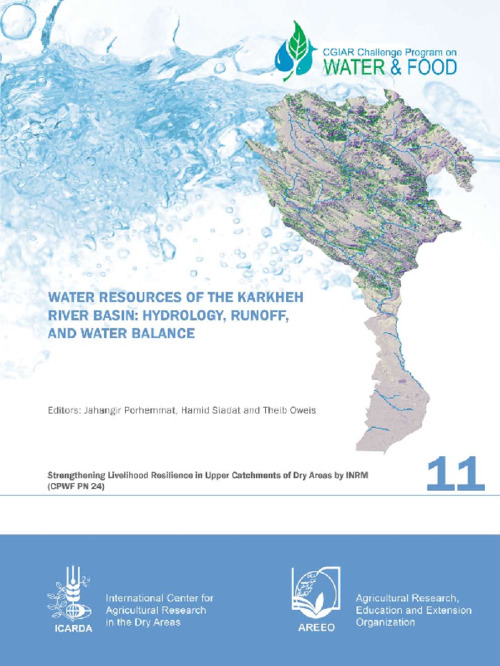 The project - ‘Strengthening Livelihood Resilience in the Upper Catchments of Dry Areas by Integrated Natural Resources Management’ was undertaken in the Karkheh River Basin (KRB) of southwest Iran, from August 2005 to December 2008. The research program was guided by the ‘Integrated Natural Resources Management’ framework, in which assessment of water resources was one of the most important components. The KRB is a large basin with 47 plains and hydrologic units. This report presents an overall view of its surface water and groundwater status, together with two detailed case studies in Honam and Merek sub-basins. The overall goal of the project was to strengthen livelihood resilience of the rural poor and to improve environmental integrity in the upper catchments of the basin. The data collected was being fed into new models of catchment management and policy. The ﬁrst chapter provides an analysis of annual runoff and annual runoff coefﬁcients to explain spatial variation of surface water in the upper KRB. Runoff analysis is considered for different time scales and places. Runoff was analyzed in different types of basins under varying climates. According to the results, runoff depth has a relatively high correlation with precipitation and slope; however, in single variable analysis, it showed a greater correlation with slope than precipitation. In the second chapter, a summary of hydrogeology and groundwater quality is presented for the KRB. Alluvial and karstic aquifers and their geological and hydrological properties are described. To prepare a general water balance for the basin, aquifers (alluvial and karstic), groundwater exploitation along with groundwater usage, balance, and quality are considered in the different hydrologic units. In addition, a water balance overview of the KRB is discussed that presents a schematic sketch of groundwater resources and uses in the basin. Chapter three is devoted to the study of water assessment in Honam and Merek subbasins of KRB. Two hydrometric data loggers and a rain gauge installed/selected in each watershed are explained. For both catchments, a simple water balance equation is used in which the amount of rainfall is set equal to the sum of outlet discharge, evapotranspiration, and exchanging groundwater. The application of a single rainfall–runoff event model for evaluation of land use effect on ﬂooding in Honam and Merek is explained in chapter 4. GIS and HEC-HMS models are combined to assess the effects of different scenarios of land-use changes on runoff and hydrograph shape. The results emphasize the effects of land-use changes on hydrologic response of the basin. The simulation by HEC-HMS shows that unsuitable land-use would increase the peak ﬂow and ﬂood volume, whereas proper land use would decrease them. In chapter ﬁve, drought in the upper KRB is analyzed using Standardized Precipitation Index (SPI). The index principles are reviewed and applied to the monthly precipitation data of the nearby stations of Kermanshah and Alashtar for, respectively, Merek and Honam for various time scales, i.e. 1-, 3-, 6-, and 12-month SPIs are used to evaluate hydrological and agricultural droughts. Using rainfall data (1966-2000), it is clear that Honam and Merek catchments experienced, respectively, 14 and 20 droughts of 1–3 months length. During 1966–2000, there was no drought in Honam in October, whereas Merek experienced drought 11 times in that month. In November, the two catchments suffered very similar droughts, often at the same time. In both catchments, the frequency of drought in April was almost the same. Drought in May was more frequent in Merek than Honam, although in some years both catchments experienced drought in this month.