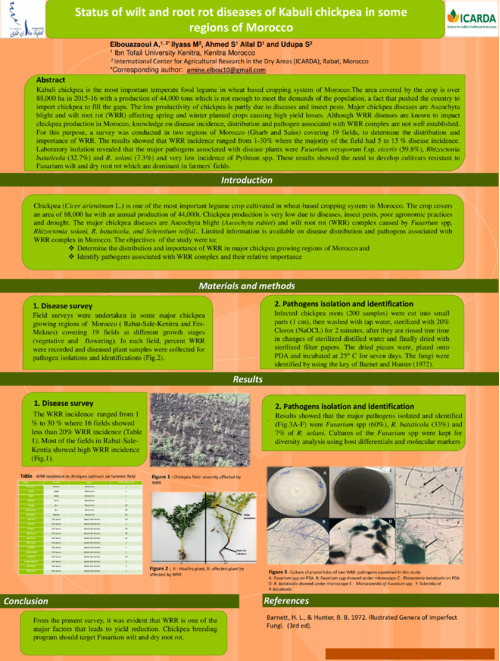 Kabuli chickpea is the most important temperate food legume in wheat based cropping system of Morocco.The area covered by the crop is over 88,000 ha in 2015-16 with a production of 44,000 tons which is not enough to meet the demands of the population, a fact that pushed the country to import chickpea to fill the gaps. The low productivity of chickpea is partly due to diseases and insect pests. Major chickpea diseases are Ascochyta blight and wilt root rot (WRR) affecting spring and winter planted crops causing high yield losses. Although WRR diseases are known to impact chickpea production in Morocco, knowledge on disease incidence, distribution and pathogen associated with WRR complex are not well established. For this purpose, a survey was conducted in two regions of Morocco (Gharb and Saiss) covering 19 fields, to determine the distribution and importance of WRR. The results showed that WRR incidence ranged from 1-30% where the majority of the field had 5 to 15 % disease incidence. Laboratory isolation revealed that the major pathogens associated with disease plants were Fusarium oxysporum f.sp. ciceris (59.8%), Rhizoctonia bataticola (32.7%) and R. solani (7.3%) and very low incidence of Pythium spp. These results showed the need to develop cultivars resistant to Fusarium wilt and dry root rot which are dominant in farmers' fields.