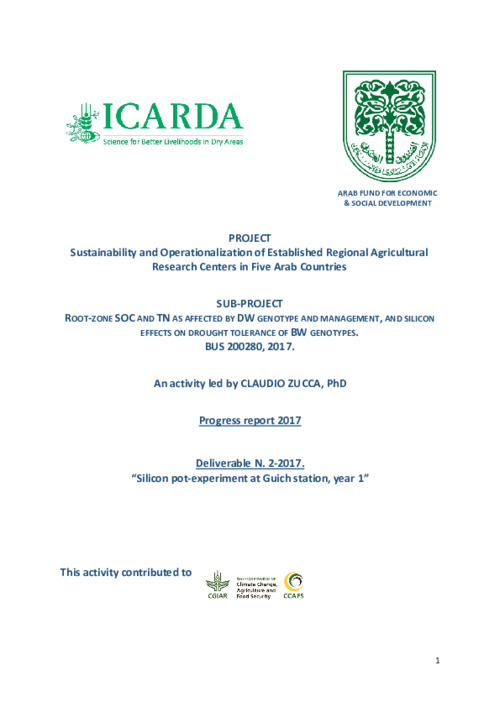 This research activity titled “ROOT-ZONE SOC AND TN AS AFFECTED BY DW GENOTYPE AND MANAGEMENT, AND SILICON EFFECTS ON DROUGHT TOLERANCE OF BW GENOTYPES” was funded as part of the Project titled “Sustainability and Operationalization of Established Regional Agricultural Research Centers in Five Arab Countries”, granted by the Arab Fund for Economic & Social Development (AFESD) and implemented by ICARDA. The research was started in 2016 as a response to the perceived need to launch interdisciplinary research linking soil and water researchers, crop breeders, and physiologists of ICARDA. The goal of the research is to activate novel research lines to understand if i) soil-improvement traits can become a target in crop breeding, and ii) bio-available Silicon can contribute to increase drought tolerance of cereals. The research was launched on own funds during fall 2016, and recommended for funding by AFESD in 2017. This is the first annual report of the Silicon-related component of the research, on the effects of bio-available Silicon on the drought tolerance of Winter Wheat genotypes. Citation: Zucca C. (2017). Silicon pot-experiment at Guich station, year 1. Progress Report. International Center for Agricultural Research in Dry Areas (ICARDA). Rabat, Morocco.