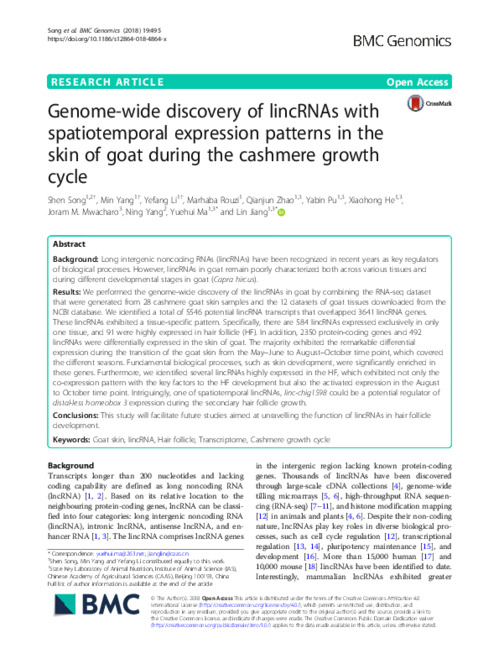 Background: Long intergenic noncoding RNAs (lincRNAs) have been recognized in recent years as key regulators of biological processes. However, lincRNAs in goat remain poorly characterized both across various tissues and during different developmental stages in goat (Capra hircus). Results: We performed the genome-wide discovery of the lincRNAs in goat by combining the RNA-seq dataset that were generated from 28 cashmere goat skin samples and the 12 datasets of goat tissues downloaded from the NCBI database. We identified a total of 5546 potential lincRNA transcripts that overlapped 3641 lincRNA genes. These lincRNAs exhibited a tissue-specific pattern. Specifically, there are 584 lincRNAs expressed exclusively in only one tissue, and 91 were highly expressed in hair follicle (HF). In addition, 2350 protein-coding genes and 492 lincRNAs were differentially expressed in the skin of goat. The majority exhibited the remarkable differential expression during the transition of the goat skin from the May–June to August–October time point, which covered the different seasons. Fundamental biological processes, such as skin development, were significantly enriched in these genes. Furthermore, we identified several lincRNAs highly expressed in the HF, which exhibited not only the co-expression pattern with the key factors to the HF development but also the activated expression in the August to October time point. Intriguingly, one of spatiotemporal lincRNAs, linc-chig1598 could be a potential regulator of distal-less homeobox 3 expression during the secondary hair follicle growth. Conclusions: This study will facilitate future studies aimed at unravelling the function of lincRNAs in hair follicle development.