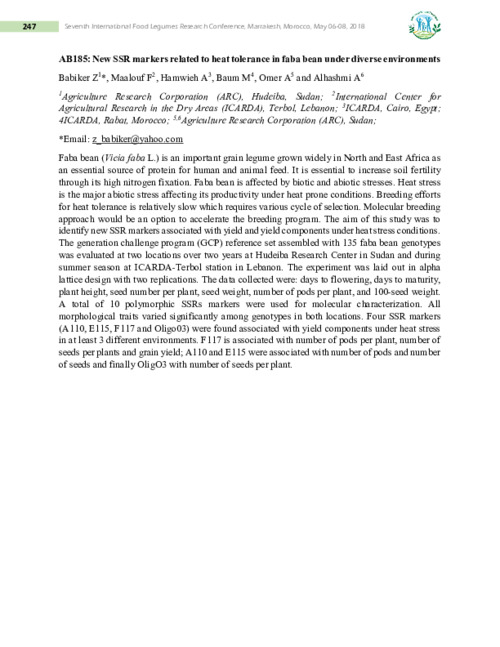 Faba bean (Vicia faba L.) is an important grain legume grown widely in North and East Africa as an essential source of protein for human and animal feed. It is essential to increase soil fertility through its high nitrogen fixation. Faba bean is affected by biotic and abiotic stresses. Heat stress is the major abiotic stress affecting its productivity under heat prone conditions. Breeding efforts for heat tolerance is relatively slow which requires various cycle of selection. Molecular breeding approach would be an option to accelerate the breeding program. The aim of this study was to identify new SSR markers associated with yield and yield components under heat stress conditions. The generation challenge program (GCP) reference set assembled with 135 faba bean genotypes was evaluated at two locations over two years at Hudeiba Research Center in Sudan and during summer season at ICARDA-Terbol station in Lebanon. The experiment was laid out in alpha lattice design with two replications. The data collected were: days to flowering, days to maturity, plant height, seed number per plant, seed weight, number of pods per plant, and 100-seed weight. A total of 10 polymorphic SSRs markers were used for molecular characterization. All morphological traits varied significantly among genotypes in both locations. Four SSR markers (A110, E115, F117 and Oligo03) were found associated with yield components under heat stress in at least 3 different environments. F117 is associated with number of pods per plant, number of seeds per plants and grain yield; A110 and E115 were associated with number of pods and number of seeds and finally OligO3 with number of seeds per plant.