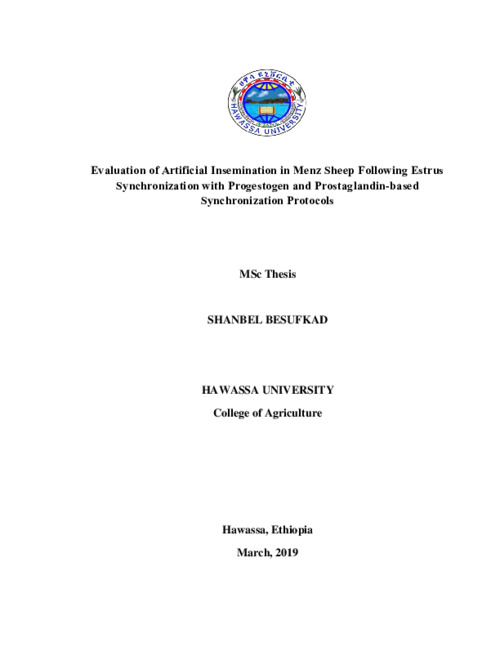 Small ruminant production is a major component of the livestock sector in Ethiopia owing to the large population of 30.70 million sheep and 30.20 million goat head (CSA, 2016). They account for 40% of cash income earned by farm households, 19% of the total value of subsistence food derived from all livestock production, and 25% of total domestic meat consumption (Hirpa & Abebe, 2008). Ethiopia is home for diverse small ruminant population, which is distributed across different agro ecological zones of the country. Small ruminant populations in Ethiopia are characterized by presence of high genetic diversity within and between breed (Alemu, 2004; Gizaw et al., 2007a), low productivity potential of the animals and kept under traditional extensive system (Gizaw et al., 2010a). Small ruminant has been significantly supporting the livelihood of smallholder farmers, they serve as living bank for their owners, cultural heritage of the communities, source of immediate cash need, medicinal value and insurance against crop failure especially where land productivity is low and unreliable due to erratic rainfall, severe erosion, frost, and water logging problems (Gizaw, 2009; Tibbo et al., 2006). Despite the large numbers and the multiple roles small ruminants, farmer and national level small ruminant productivity in Ethiopia, is considered low as compared to productivity levels in developed livestock industries of the world (Gizaw et al., 2010a). This low level of productivity could be attributed to several factors, chief among them is low genetic potential of the animals (Abebe et al., 2010). However, successful and sustained genetic improvement programs of indigenous breeds and populations of small ruminants under smallholder production condition are rare (Kosgey et al., 2006; Tibbo et al., 2006). To satisfy the growing demand for animal products, under the national level sheep breeding program crossbreeding has been opted as an option using high producer exotic genotypes to improve the genetic potential of indigenous animals. Since 2007 G.C, large numbers of Dorper sheep were imported from South Africa to form the backbone of crossbreeding program designed to utilize the fast growth rate and larger carcass of this animals with the native adaptability and toughness of local breeds. In an attempt to support such endeavors ICARDA, ILRI and BOKU university in partnership with the national agricultural research system in Ethiopia designed and implemented a new approach called community-based breeding programs (CBBP) for four selected sheep breeds (Menz, Bonga, Horro, and Afar breeds) to improve body weight and reproductive performance through selection (Haile et al., 2013). Since 2012 G.C, Debre Berhan agriculture research center crossbreeding has been implemented at villages in the lowland areas of North Showa and around Debre Berhan town using pure and 50% blood level Dorper rams to improve the genetic potential of local sheep. In addition, the research center with the collaboration of ICARDA has been implemented CBBP in the Menz areas to improve the body weight and reproductive performances of Menz sheep through selection.