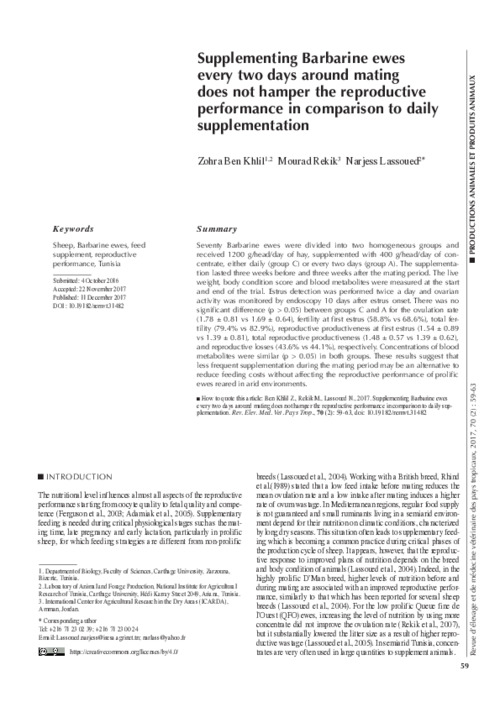 Seventy Barbarine ewes were divided into two homogeneous groups and received 1200 g/head/day of hay, supplemented with 400 g/head/day of concentrate, either daily (group C) or every two days (group A). The supplementation lasted three weeks before and three weeks after the mating period. The live weight, body condition score and blood metabolites were measured at the start and end of the trial. Estrus detection was performed twice a day and ovarian activity was monitored by endoscopy 10 days after estrus onset. There was no significant difference (p > 0.05) between groups C and A for the ovulation rate (1.78 ± 0.81 vs 1.69 ± 0.64), fertility at first estrus (58.8% vs 68.6%), total fertility (79.4% vs 82.9%), reproductive productiveness at first estrus (1.54 ± 0.89 vs 1.39 ± 0.81), total reproductive productiveness (1.48 ± 0.57 vs 1.39 ± 0.62), and reproductive losses (43.6% vs 44.1%), respectively. Concentrations of blood metabolites were similar (p > 0.05) in both groups. These results suggest that less frequent supplementation during the mating period may be an alternative to reduce feeding costs without affecting the reproductive performance of prolific ewes reared in arid environments.