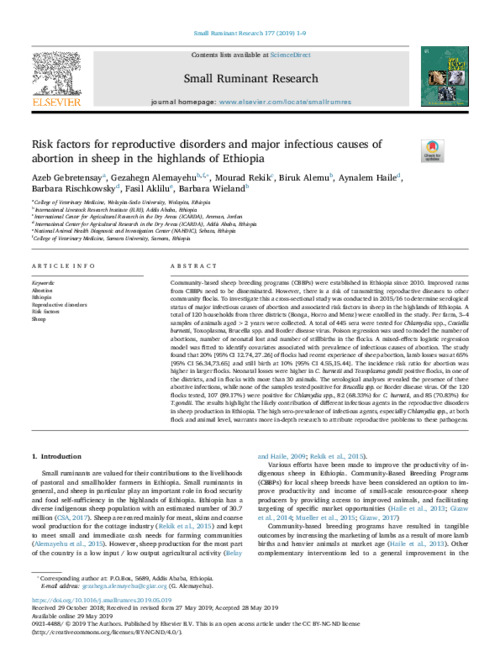 Community-based sheep breeding programs (CBBPs) were established in Ethiopia since 2010. Improved rams from CBBPs need to be disseminated. However, there is a risk of transmitting reproductive diseases to other community flocks. To investigate this a cross-sectional study was conducted in 2015/16 to determine serological status of major infectious causes of abortion and associated risk factors in sheep in the highlands of Ethiopia. A total of 120 households from three districts (Bonga, Horro and Menz) were enrolled in the study. Per farm, 3–4 samples of animals aged >2 years were collected. A total of 445 sera were tested for Chlamydia spp., Coxiella burnetti, Toxoplasma, Brucella spp. and Border disease virus. Poison regression was used to model the number of abortions, number of neonatal lost and number of stillbirths in the flocks. A mixed-effects logistic regression model was fitted to identify covariates associated with prevalence of infectious causes of abortion. The study found that 20% [95% CI 12.74, 27.26] of flocks had recent experience of sheep abortion, lamb losses was at 65% [95% CI 56.34,73.65] and still birth at 10% [95% CI 4.55,15.44]. The incidence risk ratio for abortion was higher in larger flocks. Neonatal losses were higher in C. burnetii and Toxoplasma gondii positive flocks, in one of the districts, and in flocks with more than 30 animals. The serological analyses revealed the presence of three abortive infections, while none of the samples tested positive for Brucella spp. or Border disease virus. Of the 120 flocks tested, 107 (89.17%) were positive for Chlamydia spp., 82 (68.33%) for C. burnetii, and 85 (70.83%) for T.gondii. The results highlight the likely contribution of different infectious agents in the reproductive disorders in sheep production in Ethiopia. The high sero-prevalence of infectious agents, especially Chlamydia spp., at both flock and animal level, warrants more in-depth research to attribute reproductive problems to these pathogens.