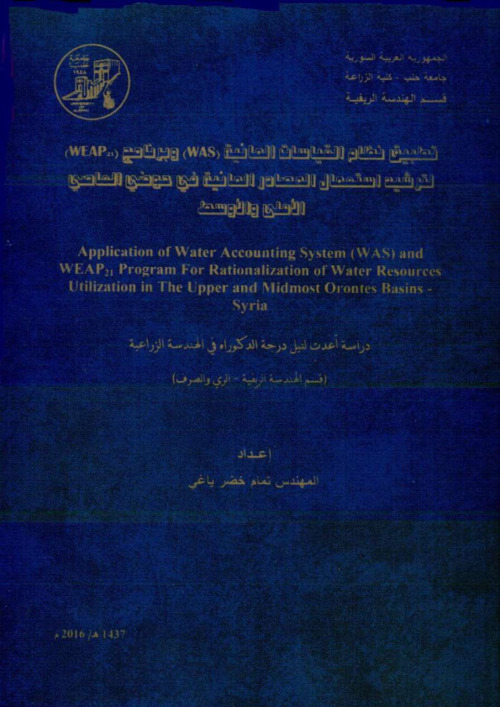 Tammam Yaghi. (3/8/2016). Application of Water Accounting System (WAS) and WEAP21 Program For Rationalization of Water Resources Utilization in The Upper and Midmost Orontes Basins - Syria.

Homs governorate watershed is considered as the agricultural production hub and a strategic water reservoir of Syria. However, freshwater used unsustainably in the upper and midmost Orontes basin (from Syrian- Lebanese borders to Rastan dam), in parallel with increased agriculture production, increased pollution, population, and economic growth, water predicted to become scarce by 2020 in this basin. Therefore, it is necessary to develop a prediction model that helps to estimate future availability of water resources and demand. Also, how some strategies can help the government in achieving sustainable development. Consequently, their water security in the wake of climate changes till 2050. Water accounting system (WAS) was used to estimated water resources and unmet demand in the studied basin. After analysis available data (1975/76-2009/10), where the 2010 was considered base year. Three sub-scenarios were studied [Reference scenario (RF), Best available technology scenario (BAT), High Tech Scenario (HT)], to predict the future water balance of the 2011 till 2050, and that was through three cases of annual climate changes [Normal at probability of water resources 50% (A), Dry at probability of water resources 75% (B), and Very dry at probability of water resources 95% (C)], compared with results of the WEAP program after the calibration it from 2004 to 2010. WEAP-MABIA program was used to study the following future strategies: Optimal use of Zeita dam scenario, Optimal agricultural water management, Low population growth rate, and Creation of alternative dam in Kattinieh lake, and compared it with the status quo scenario in 2010. The results are visualized as graphs, maps and tables. Water balance coefficient (Wb) after the reuse of treatment non-conventional water resources in the upper Orontes basin, will rise to up to (0.28) in the case (A), and (0.14) in the case (B), and (- 0.15) in the case (C), at the year 2050, compared with its values without them, and after the application of (HT) scenario. when taking loss in the Homs Lake and obligations of the demand for water in the midmost Orontes into account, it is noted that the upper Orontes basin will be completely closed for the midmost Orontes in the Reference scenario (i.e all available water resources used before the dam Kattinah) in the case (A), even after the application of advanced technologies scenarios will not improve the water situation very much and will remain semi-closed for the midmost basin in case of nature and dry, closed completely in a very dry state. Whereas simulation rate was 94% in the (A) case, 91% in the (B) and 99% in the (C), comparison with the status quo. At the level of the main studied scenarios, it concluded that less amount of water deficit was in the sub-scenario (High technologies, HT), where the effectiveness of the basin will be studied 81.17% in the case of (A), and 69.7% in the case of (B) and 27.9% in the case of (C) 2050, according to the status quo in 2010 without applying any new strategies. Effectiveness of the basin studied often did not rise in 2050 after investing dam Zeta compared to the main scenario first sub-scenario (HT), but has had a deep impact on meeting the first priority obligations (domestic use) in the dry cases and it will play major role in raising the degree of organization and investment watery contained surface renewed, does not have much effect on decreasing the amount of water deficit the fact that most of them in the agricultural sector, and that he have the application of the main scenario (typical agricultural water management) where water use efficiency of irrigated crops (kg/m3 ) will rise about 34% compared with the field application, and after the application of sub-scenario (HT) will be provided 70 mm 3 of irrigation water, and the deficit will disappear almost entirely in 2050 in the case (A) and will increase the effectiveness of the basin studied to 85.7% and 47.6% in dry and very dry consecutive cases. After taking a low rate of population growth into account will show high effectiveness to reach 88.5% and 69.11% in the dry and very dry 2050. The creation of alternative dam in Homs Lake have clear impact on decreasing the amount of evaporation from the surface of Lake and to meet the commitments in the midmost Orontes with the presence of a water surplus in natural and dry cases. Virtual water is the water embedded in a product. If agricultural plans take crop water requirements and virtual water concepts into consideration, they can reduce water needs. could save more than 10 MCM of water if lower water consumption crops as garlic was substituted on the land currently planted with cotton and sugar beet. The pollution modeling will reduce the number of monitoring points from 10 points to 5 points, and this in turn leads to a reduction in the number of analyst water samples at a rate of 50%, thereby reducing analysis cost in the same ratio. We can be considered integrated program (WEAP-MABIA) and other programs such like (ArcGIS), (SPAW), (NewLoc-Clim) and (ET0 Calc) very modern tools, enables water expert from saving time, effort and get very accurate results when study the water balance, demand management of water resources, and the study of an infinite number of solutions, and selecting logical solution to achieve sustainable development.