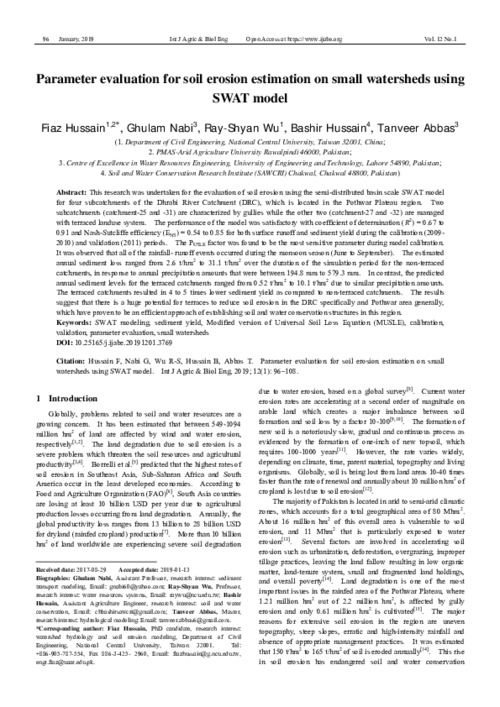 This research was undertaken for the evaluation of soil erosion using the semi-distributed basin scale SWAT model for four subcatchments of the Dhrabi River Catchment (DRC), which is located in the Pothwar Plateau region. Two subcatchments (catchment-25 and -31) are characterized by gullies while the other two (catchment-27 and -32) are managed with terraced landuse system. The performance of the model was satisfactory with coefficient of determination (R2) = 0.67 to 0.91 and Nash-Sutcliffe efficiency (ENS) = 0.54 to 0.85 for both surface runoff and sediment yield during the calibration (2009- 2010) and validation (2011) periods. The PUSLE factor was found to be the most sensitive parameter during model calibration. It was observed that all of the rainfall- runoff events occurred during the monsoon season (June to September). The estimated annual sediment loss ranged from 2.6 t/hm2 to 31.1 t/hm2 over the duration of the simulation period for the non-terraced catchments, in response to annual precipitation amounts that were between 194.8 mm to 579.3 mm. In contrast, the predicted annual sediment levels for the terraced catchments ranged from 0.52 t/hm2 to 10.1 t/hm2 due to similar precipitation amounts. The terraced catchments resulted in 4 to 5 times lower sediment yield as compared to non-terraced catchments. The results suggest that there is a huge potential for terraces to reduce soil erosion in the DRC specifically and Pothwar area generally, which have proven to be an efficient approach of establishing soil and water conservation structures in this region.