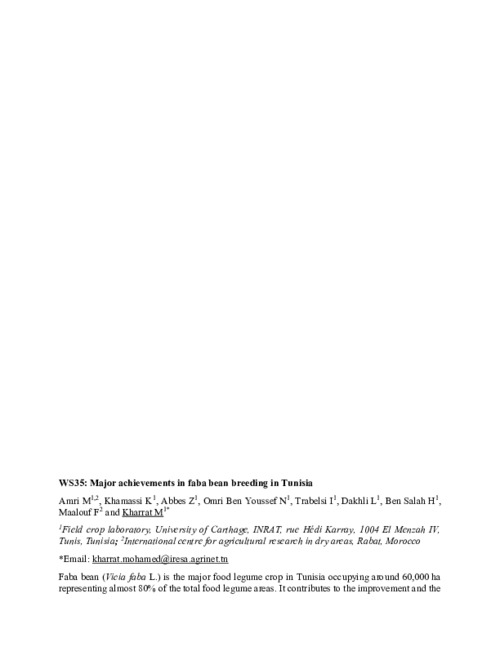 Faba bean (Vicia faba L.) is the major food legume crop in Tunisia occupying around 60,000 ha representing almost 80% of the total food legume areas. It contributes to the improvement and the sustainability of wheat production system. Breeding activities conducted in the Field Crops Laboratory of the National Agricultural Research Institute of Tunisia and the Regional Research Centre on Field Crops of Beja released varieties with high yield potential and tolerant to major stresses. The breeding program has registered catalogue several varieties of small and large seeded faba bean during the last 15 years in the Tunisian plant variety official. Three varieties (Najeh, Chourouk and Shams), among the five small seeded registered varieties, with partial resistance to Orobanche responsible for considerable yield losses in the region and constituting the main constraints of the crop in Tunisia. Advanced research studies conducted on the new varieties showed that many resistance mechanisms are involved. Beside these varieties, the program has registered two other small seeded varieties, Bachaar (moderately resistant to rust, stem nematode and tolerant to drought) and Badi and two large seeded varieties (Mamdouh and Chahbi). Tunisian public and private seed companies are currently producing seeds of most of the released varieties which will contribute to the increase of national faba bean production and development of the crop in near future in the country. In addition, the program has developed integrated production packages in order to improve the productivity through an effective control of the major biotic and abiotic constraints.