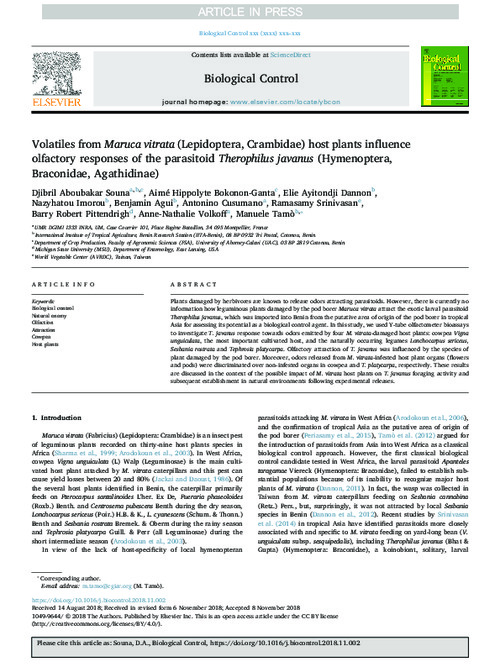 Plants damaged by herbivores are known to release odors attracting parasitoids. However, there is currently no information how leguminous plants damaged by the pod borer Maruca vitrata attract the exotic larval parasitoid Therophilus javanus, which was imported into Benin from the putative area of origin of the pod borer in tropical Asia for assessing its potential as a biological control agent. In this study, we used Y-tube olfactometer bioassays to investigate T. javanus response towards odors emitted by four M. vitrata-damaged host plants: cowpea Vigna unguiculata, the most important cultivated host, and the naturally occurring legumes Lonchocarpus sericeus, Sesbania rostrata and Tephrosia platycarpa. Olfactory attraction of T. javanus was influenced by the species of plant damaged by the pod borer. Moreover, odors released from M. vitrata-infested host plant organs (flowers and pods) were discriminated over non-infested organs in cowpea and T. platycarpa, respectively. These results are discussed in the context of the possible impact of M. vitrata host plants on T. javanus foraging activity and subsequent establishment in natural environments following experimental releases.