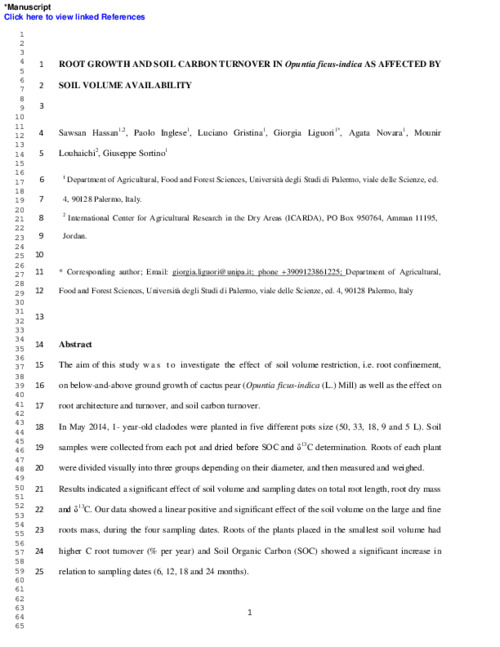 The aim of this study was to investigate the effect of soil volume restriction, i.e. root confinement, on below-andabove ground growth of cactus pear (Opuntia ficus-indica (L.) Mill) as well as the effect on root architecture and turnover, and soil carbon turnover. In May 2014, 1- year-old cladodes were planted in five different pots size (50, 33, 18, 9 and 5 L). Soil samples were collected from each pot and dried before SOC and δ13C determination. Roots of each plant were divided visually into three groups depending on their diameter, and then measured and weighed. Results indicated a significant effect of soil volume and sampling dates on total root length, root dry mass and δ13C. Our data showed a linear positive and significant effect of the soil volume on the large and fine roots mass, during the four sampling dates. Roots of the plants placed in the smallest soil volume had higher C root turnover (% per year) and Soil Organic Carbon (SOC) showed a significant increase in relation to sampling dates (6, 12, 18 and 24 months). Our research showed that the significant effect of the interaction between sampling date and soil volume (pot size) clearly indicates how soil availability is relevant SOC contribution. Based on the new findings of our study, cactus pear could enhance accumulation of SOC in soils